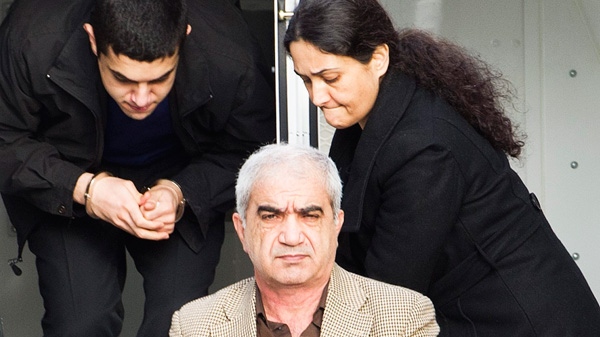 MONTREAL -- A woman found guilty of murdering her three daughters in a so-called honour killing was stripped of her permanent residency Thursday and ordered deported from the country.

But the Immigration and Refugee Board of Canada's expulsion order for Tooba Yahya will be executed only when she is released from a Quebec prison, her lawyer, Stephane Handfield, said in an interview.

Yahya, husband Mohammad Shafia and their son, Hamed, were each found guilty in 2012 on four counts of first-degree murder and sentenced to life in prison with no chance of parole for 25 years.

The bodies of sisters Zainab, 19, Sahar, 17, and Geeti, 13, and Rona Amir Mohammad, 52, Mohammad Shafia's childless first wife in a polygamous marriage, were found in June 2009 in a car submerged in a canal in Kingston, Ont.

The Crown argued at trial the women were murdered because they refused to abide by the family's rules.

Court heard that notions of honour, directly tied to women's sexuality and general control over their behaviour, led the Shafias to kill in an effort to cleanse them of the shame they perceived their daughters to have brought upon them.

The family was originally from Afghanistan and lived in Montreal.

Handfield said the order to deport Yahya was recently requested by the Canada Border Services Agency.

"Why now? Why not before or later? I don't know," he said about the agency's motives.

While Yahya is now without status in a Quebec prison, Handfield said nothing should change regarding her rights or conditions in detention.

"She's never complained to me about her conditions in prison," he said.

The Crown theory was that Shafia, Yahya and their son drowned the four victims either to the point of death or unconsciousness, placed their bodies in the car, then pushed it into the canal using the family's other vehicle.

Prosecutors, however, couldn't prove how or where the pre-drowning happened.

The family has been behind bars since their arrests on July 22, 2009.

Handfield said because Yahya isn't a Canadian citizen and due to the first-degree murder conviction, she has no right under Canadian immigration law to appeal her deportation order.

"The country's immigration laws could change between now and when she gets out," Handfield said.

"We'll have to see what is open to her when she is liberated."