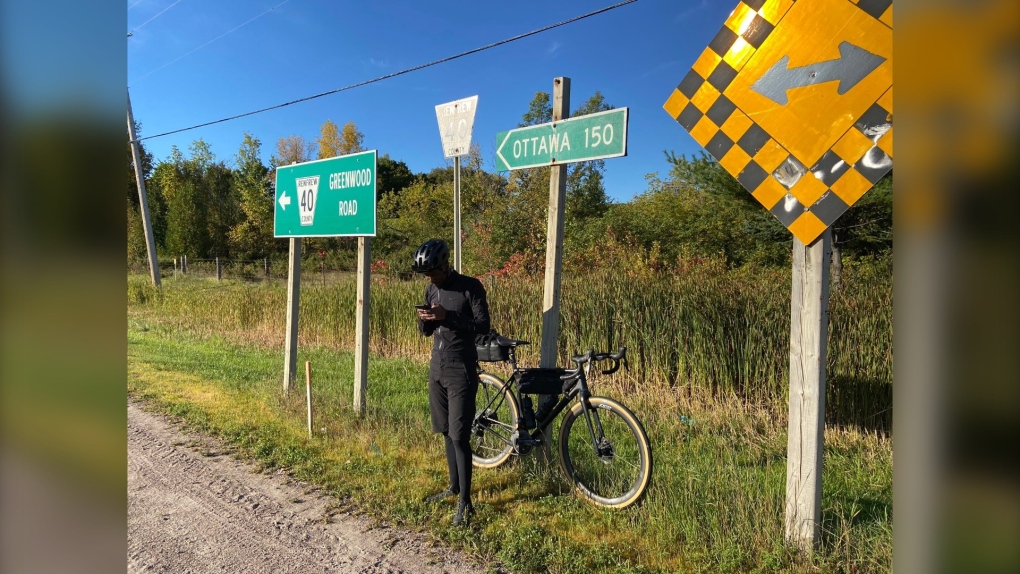 PEMBROKE -- At 8 a.m. in Pembroke on Saturday, Jean-Aime Bigirimana, better known as JaBig, was up and ready to begin the Quebec leg of his cross-Canada cycling trip.

Mornings are a tough time for JaBig, as most nightclub DJ’s would normally be heading to bed around that time after a Friday night.

Almost everyday since August 6 in Victoria, B.C., JaBig has gotten on his bicycle as he tries to complete his ride from the Pacific Ocean to the Atlantic, in St. John’s, Newfoundland. He’s taking on the trip for a cause close to his heart, World Bicycle Relief, which delivers bicycles to Africa.

"World Bicycle Relief was founded as a very simple observation by someone who said, sometimes the reason some children don’t go to school is because school is far," says Bigirimana.

Since the COVID-19 pandemic, the charity has also expanded the use of their resources, getting bikes to frontline healthcare workers as well.

"It’s a difference between them seeing five patients a day, and them seeing 15," said Bigirimana.

This isn’t the first time JaBig has taken on a cross-country trek, having rode from coast to coast to coast back in 2016-2017. That journey was made in winter, "And when I say winter we’re talking about all the way from -20C to -40C. And I have to say it was much easier than riding in a pandemic in the middle of summer."

Unlike his previous trip there’s no stopping at tourist attractions along the way, as many have been closed. It’s even the little things in JaBig’s day to day rides.

"Construction workers, when I go by they will give me water. And it’s funny because in 2020, nobody hands anybody anything. So they say hey, do you want some water, and then they put it on the ground."

On a cross-Canada bicycle trip to raise money for @PowerOfBicycles, Montreal DJ @JaBig rolls through #Pembroke on his way into Quebec, and will stop in Ottawa tonight #Ottnews pic.twitter.com/S168vOkyVg

Bigirimana expects to make it to the Atlantic Ocean by the end of September and is closing in on his fundraising goal.

"My aim was to ride 12,000 kilometres because that’s the distance I would have to cover if I went all the way from the Arctic to the Pacific to Atlantic. So it was going to be $12,000 American dollars. And so far I’m half way."

But for the DJ who’s traded in spinning records for pedals, the money isn’t the be all end all.

"It’s not about how much money. It’s about the impact that money can do to get more bikes. So for me I’m more focused on getting more bikes and changing lives."