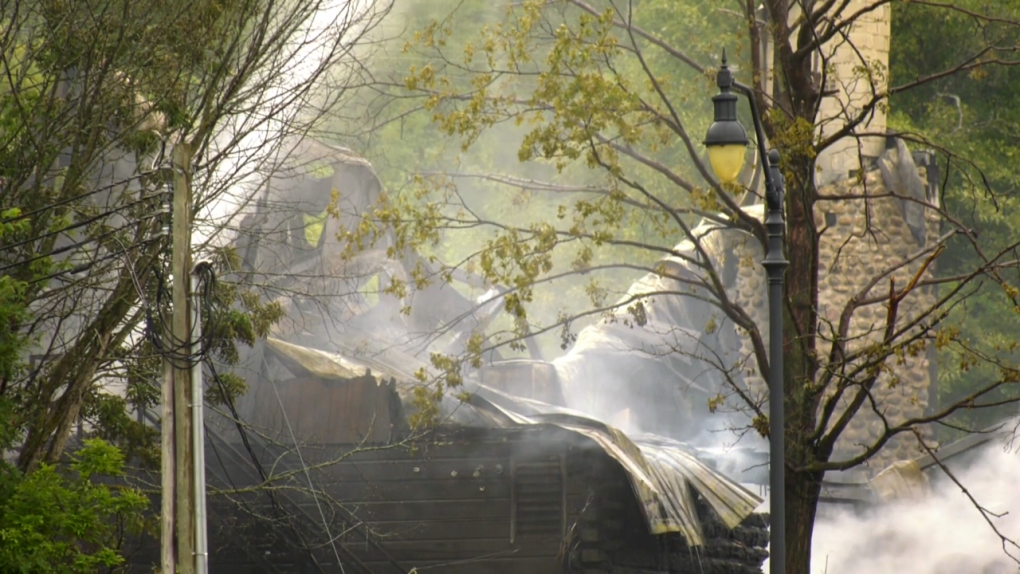 The owners of Mont Cascades water park and ski resort are vowing to rebuild following a devastating fire that destroyed the main chalet at the popular resort in Cantley, Que on August 1, 2021. (Shaun Vardon / CTV News Ottawa)

CANTLEY, QUE. -- Mont Cascades will remain closed for the summer following a fire that destroyed its main chalet over the weekend.

However, the owners of the popular resort in Cantley, Que. are promising there will be skiing this winter on the slopes.

In a statement on its website, Mont Cascades water park and ski resort announced reopening in the short-term is "impossible," and the focus will be on preparing for the winter.

"After a complete analysis of the situation and according to the delays required by several suppliers, it is obvious that a reopening is impossible in the short term," said Mont Cascades on Wednesday.

"With the heavy machinery working on dismantling and cleaning of debris, we feel that the site would not be safe for our guests. We must therefore unfortunately announce that the 2021 summer season is over."

The main chalet at Mont Cascades was badly damaged by a fire early Sunday morning.  Mont Cascades said the Cantley fire chief was looking at the possibility the fire was caused by an electrical failure.

Mont Cascades initially said it would be closed this week, and a plan to reopen would be announced by Friday.

On Wednesday, the owners said they decided the summer season is over due to the damage to the site and the work required to rebuild.

"For now on, our team will concentrate its efforts on reopening for the winter season. One thing is certain: there will be skiing this winter at Mont Cascades," said Mont Cascades.

All ticket holders will be contacted directly once the computer and telephone systems are restored.

Mont Cascades offers water parks in the summer and skiing in the winter.