'Who are you?!': Activists upset after run-in at City Hall while protesting LRT 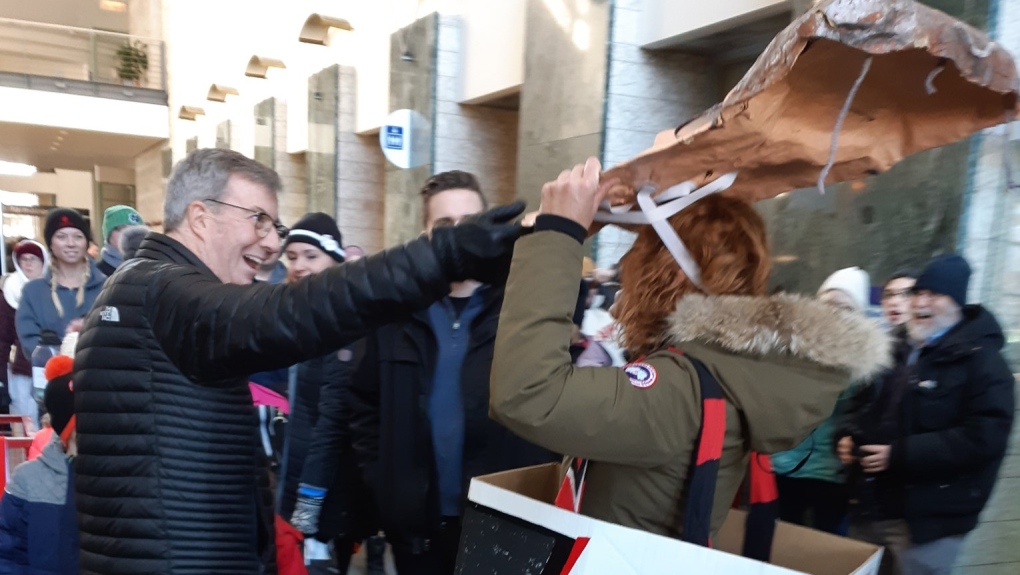 Velvet Leclair (right) has a run-in at Ottawa City Hall with Mayor Jim Watson while protesting the issues with the Confederation LRT line. (Courtesy: Marnie Wellar)

OTTAWA -- A pair of local activists are upset after a run-in with Mayor Jim Watson before being kicked out of City Hall for protesting the reliability of the LRT.

Marnie Weller and Velvet Leclair brought a “Giant Jim” Watson mask and makeshift LRT train cutout with the hashtag #FixTheLRT to the Mayor’s Family Day skate at the Rink of Dreams Monday. After 45 minutes of skating, they tried to get Watson’s attention.

"Giant Jim tried to talk to the Mayor as he headed inside (City Hall), but the Mayor barreled on past," says Wellar.

Velvet, wearing the Watson mask, followed him inside, calling out to him. According to Wellar, Watson turned and asked "Who are you?!" Velvet said "I'm you! Fix the LRT!" Wellar says Watson asked again who she was before reaching out and flipping up the large mask. Velvet says the move scratched her face.

Right after this moment City Hall security informed us that Giant Watson was a "face covering" and the mini LRT car was "a sign" - and said both things are now banned from "all City property". The Giant Tiger mascot and Marvel impersonators were acceptable though. #FixTheLRT pic.twitter.com/tp9aSoeFQ0

CTV News reached out to the Mayor's office, but no comment was provided.

The pair then both moved inside City Hall, where they were approached by a security guard.

The duo countered by saying the pieces were political protest art, but claim security didn't care.

"I said that the restrictions they (security) were quoting us were only for council meetings, not for all city property," Wellar says. "They said I was wrong and that they were just doing their jobs."

Wellar and Leclair did eventually take off the mask and put the sign away, but say they continued to be harassed by the security guards.

"Peeking around the corner to see if we were still there, walking back and forth in front of us and looking down on us from the mezzanine above," says Wellar.

They did eventually leave City Hall. The incident is getting a lot of attention on social media, including some councillors.

"If this incident went down as presented, that's disturbing," says Jeff Leiper on Twitter. The Kitchissippi ward councillor says he'll be asking the City Manager for an explanation.

If this incident went down as presented, that’s disturbing. I’ll be asking our City Manager for a full explanation. We were told that new City Hall protection measures were for physical security, but this can only be taken as deliberately quelling dissent and legitimate protest. https://t.co/rUv4sTawh5