VIA Rail cancels trains between Toronto, Montreal and Ottawa because of First Nation protest

OTTAWA -- A protest over a natural gas pipeline in B.C. is causing problems for VIA Rail service in Ontario.

The protesters are blocking tracks east of Belleville in support of the Wet’suwet’en First Nation, where the RCMP recently enforced an injunction against the Nation’s hereditary chiefs and their supporters, who are opposed to the Coastal GasLink pipeline.

VIA Rail says train service between Ottawa and Toronto is interrupted in both directions. Service between Montreal and Ottawa continues as normal.

In a statement, VIA Rail said, “While all other trains between Montreal-Ottawa-Toronto are prepared to leave on schedule should we achieve line clearance, your departure may be delayed or may not operate due to circumstances beyond our control.”

Passengers, or anyone waiting for someone on a train, should check VIA Rail’s website.

VIA says all affected customers will receive a refund on trains that were cancelled Friday.

"We are aware that this situation, which is unfortunately beyond our control, has an impact on our customers and we apologize for the inconvenience this situation is causing," a VIA Rail spokesperson said in a statement. "As the situation progresses, more trains are cancelled. Passengers should expect more details by email as the situation evolves."

CN Rail said in a statement, "CN crews and CN police are responding to a protest near CN tracks between Shannonville and Desoronto. Train movements are currently stopped and we are monitoring the situation."

Protesters say they are blocking the tracks to send a message about what’s happening in Wet’suwet’en Territory. Six people were arrested Thursday at a natural gas pipeline worksite near Houston, B.C. The protest in Ontario began Thursday afternoon.

The Tyendinaga protesters say they will continue to block the tracks until the RCMP leave Wet’suwet’en Territory.

It's unclear if the protest has been approved or sanctioned by the Tyendenaga Mohawk Council. 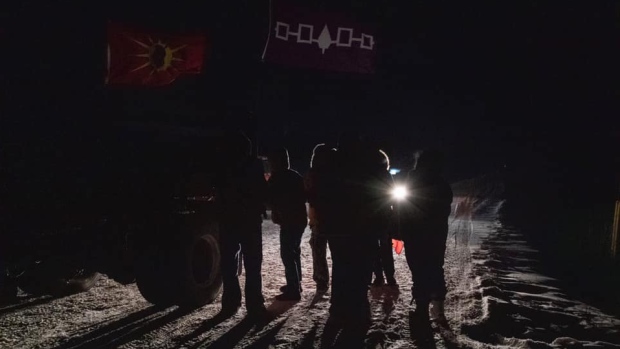 The shutdown of the line has left many VIA Rail passengers stuck. VIA was not offering alternative arrangements for travelers whose trains were cancelled Friday morning.

Thomas Dobronyi told CTV News he was supposed to take the train from Toronto back to Montreal for class at McGill. He’s now stuck in Toronto and keeping watch for updates online.

“I was in the long lineup for the train, which included a number of people who had re-booked after cancellations yesterday,” he said, via Twitter. “At 6:30, VIA was still indicating the train would leave on time. It was only shortly before our scheduled departure that they started making announcements about the possibility of refunds.”

Dobronyi said there’s no way he’s making it to class in Montreal, so he’s let his prof know he’ll be delayed.

“I want to be perfectly clear that despite enormous personal inconvenience, I am supportive of the action by the folks of Tyendinaga,” he said. “Of course, I’m annoyed and disappointed, but if that’s part of the cost of letting Canada know that what’s happening out in B.C. isn’t right, I gotta accept and embrace it.”

OPP Const. Bill Dickson says officers are aware of the protest but are just monitoring it for now. A liaison team is in the area, working with the OPP’s counterparts at CN Rail.

Dickson says police are keeping an eye on the situation to ensure public safety. No arrests have been made at this time.