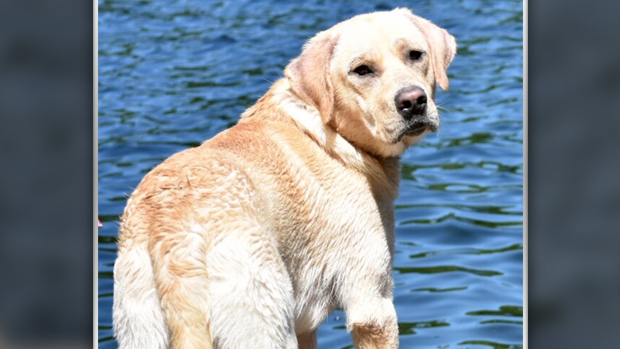 A family is pleading for the safe return of their dog after they say the Labrador Retriever was taken from their cottage. Days later his owners say the thief dropped off a scathing letter accusing the family of neglect.

The one-year-old dog named Buckaroo was leashed outside the family’s cottage west of Ottawa in Cloyne, Ontario when he was taken on Thursday, August 15th. The family says they went door-to-door looking for the dog, called local shelters and clinics hoping he may have been returned and searched the wooded areas – all with no success.

The dog’s owner, Peter Phillips, says on August 19th the family found a letter at the cottage telling them to stop looking for the animal.

“I have your dog so stop looking for him. He deserves a better life than you gave him,” the note started out.

The family says the note went on to accuse them of neglecting the animal and not providing him proper care.

“He is far underweight for his body. His ears are so infected that he has scratched most of the fur off of them.”

The letter was printed on a piece of paper but at the bottom of the page was one last message written in pen.

“You were gone for almost 3 days & just left him there,” the letter concluded.

The family says the unknown author of the note is misinformed about the care the animal receives.

Phillips, who is from Nunavut, says he is visiting family in Ontario with Buckaroo. He says on Thursday he left Buck outside on a leash while he was away from the cottage. Phillips says the cottage does not have air-conditioning and he thought Buckaroo would be better off in a shaded area outdoors with water until he returned.

The family says Buckaroo is normally off-leash when they are outside and that he goes in every night with them to sleep in his bed.

Phillips’ sister-in-law, Jordin Legate, a veterinarian technician, says Buckaroo is a healthy weight. She agrees his ears were patchy from scratching – she says the animal recently suffered a food allergy. She says the allergy was addressed and Buckaroo’s food was changed.

“The note just said really awful things and it’s kind of scary because we bring our other dogs there as well,” Jordin said.

Jordin says she wishes the individual who has Buck would have spoken to the family about their concerns before assuming and taking matters into their own hands.

“We miss him so much and we just want him to come home,” Legate said.

Ontario Provincial Police confirm officers from the Lennox and Addington detachment are investigating the case.

Phillips says he is willing to offer a reward for Buckaroo’s safe return.