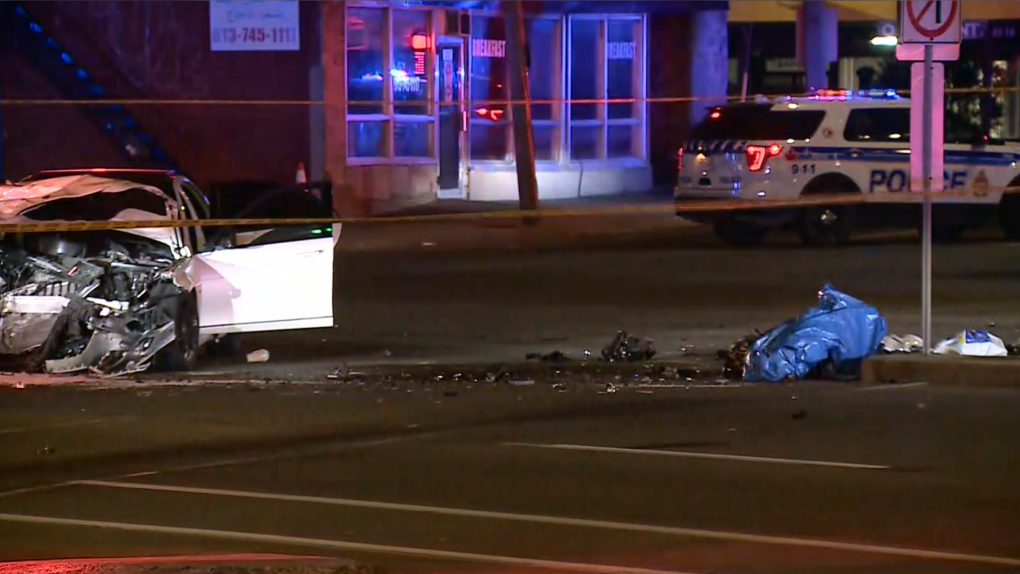 Ottawa police responded to a crash in the area of Cyrville Road and Ogilvie Road, Saturday, May 22, 2021. Police say Ontario's Special Investigations Unit is investigating an "interaction" between Ottawa police and a member of the public surrounding this incident. (CTV News Ottawa)

OTTAWA -- Ontario's police watchdog says two Ottawa police officers will not face charges in connection to a police pursuit that ended in a crash at an east end intersection, leaving a 28-year-old woman with serious injuries.

The Special Investigations Unit concluded the police pursuit was called off "well before" the suspect driver ran a red light and collided with the woman's vehicle.

In a report released late Friday afternoon, the SIU says the officers pulled over a Mercedes Benz on Donald Street for a possible Highway Traffic Act violation after noticing the vehicle "had deeply tinted windows preventing the officers from seeing inside."

The SIU says when the officers observed a transparent baggie in the vehicle passenger's possession they suspected was cannabis, they asked the driver to turn off the engine, and asked both people to exit the vehicle.

SIU Director Joseph Martino says the driver turned off the engine, turned it back on, "uttering Sorry" and sped away.

Martino says officers chased the vehicle, reaching speeds of 100 km/h. The report says a staff sergeant monitoring the chase ordered officers to end the pursuit before the crash. The SIU says witnesses reported the suspect vehicle ran a red light at the intersection of Cyrville and Ogilvie and collided with another vehicle.

On Friday, the SIU said there was "No reasonable grounds to believe the two Ottawa Police Service officers committed a criminal offence" in connection with the serious injuries suffered by the woman in the crash.

"Director Martino concluded that the police pursuit had ended well before the driver entered the intersection on a red light and caused a collision," said the SIU in a statement.

"Accordingly, there was no basis for proceeding with criminal charges in this case and the file has been closed."

Both officers declined to be interviewed by the SIU as part of the investigation.