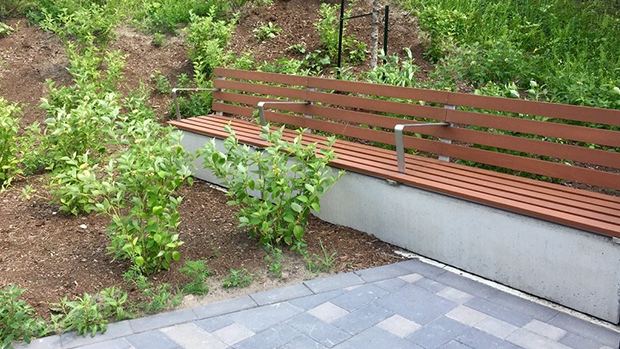 Linda Hunter photo of the bench at Hurdman Station

Here’s a story that you want to sit down for. Well maybe not - once you look at where you’re sitting: a bench at the LRT Hurdman station mistakenly plunked in the middle of the landscaping.There must be a joke in here somewhere. How many people does it take to install a bench? Well clearly at least one more because they got it wrong.

As of today you wouldn't know anything was amiss with the seating at Hurdman station.

But, up until yesterday, the wooden seating portion of the bench was stuck right into the hydrangea bushes. It is a similar situation we are told at the Bayview Station. Linda Hunter snapped photos of the seating mishap and tweeted out "is it for sitting in nature or a bit of a planting and bench failure combo?"

“Interesting design choice,” Hunter said in a telephone interview, “I think it's a matter of whoever is in charge of that part, of doing a reassessment to make sure everything is done the proper way and not to install it as lickety-split as this was installed.”

The city of Ottawa says Rideau Transit Group is responsible.

"The bench was incorrectly installed,” Michael Morgan, the Director of the Rail Construction Program said in an email "and RTG has already corrected it by removing the additional seating in the planter."

“I'm not here to give excuses for stupidity,” Hubley said, “and definitely this was stupid, that somebody had a bench installed like that and it was inspected; that troubles me a lot.”

With the ongoing delays of the LRT, performance issues and derailments, Hubley says this bench mishap makes him question the oversight of the entire plan.

“If this goes to the oversight of what's happening, then I have to talk to our people about we need to take a close look of what they're handing over to us.”

Cathy Barayni and her mother-in-law, Yveline, meantime, are enjoying the bench the way it's supposed to be and can only laugh at the seating mishap.

“They actually put the bench in the dirt?” Cathy Baranyi asks, “Did they want to?”

“I would not sit in the bushes,” adds Yveline Baranyi, “because of the mosquitoes.  That’s not for me.”

Councillor Hubley says he's glad it was fixed and quickly but he still plans to get to the bottom of how it happened in the first place and why no one seemed to notice.