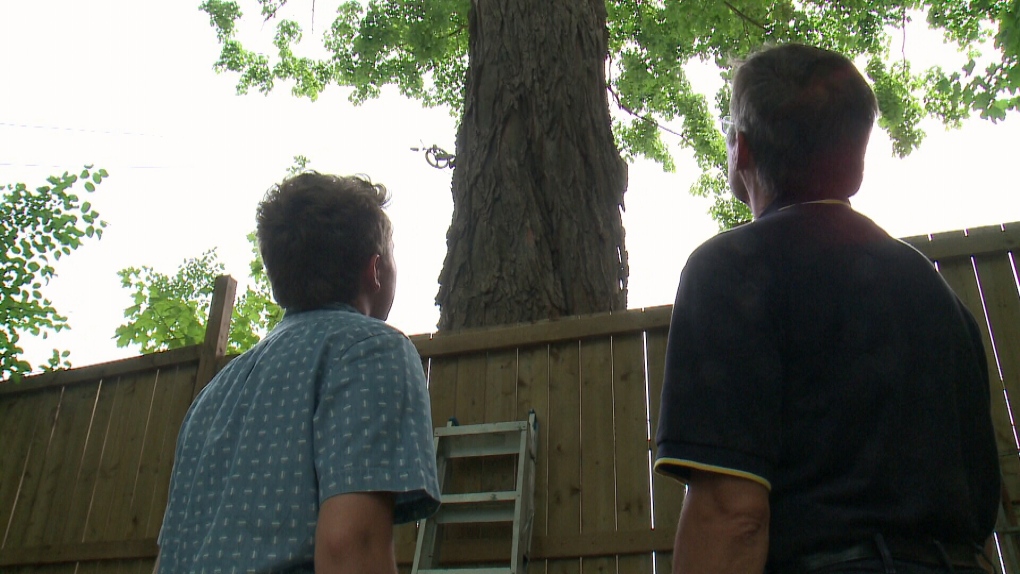 Richard Deadman and his son look at maple tree

Residents in Old Ottawa East are rallying to save two century-old maple trees from the developer's chain saw.

The company that is building townhomes on the site worries the trees wouldn't survive construction. Homeowners, though, vow the maples aren't going down without a fight.   The developer, Regional Group, says it knows how special these trees are and had hoped to save them.  Homeowners, though, don't buy that and are urging the city to help them find a resolution before it's too late.

It was the maturity of the neighbourhood  and the canopy of trees that drew Richard Deadman and his family to Old Ottawa East 15 years ago. Deadman proudly shows off his back yard and the large maples that tower over his property, providing shade and privacy.

“These are probably the largest sugar maples left in the area here,” says Deadman.

Just beyond that fence, the noise of construction is evident.  A developer, Regional Group, is building a 900-home riverfront community called Greystone Village.  The Deadmans says since November of 2016, Regional Group had promised to save the trees.  That changed a few days ago.

“I'm heartbroken to know we have to take them down,” says Erin O’Connor.  She’s the Land Development Manager with Regional Group and says what changed was a recent report that told them their plan to preserve the tree roots through a special system wasn't going to work.  The idea was to put a Lego-like system in place to go on tops of the roots in order to allow Regional Group to build a laneway over the roots.  O’Connor says it was a proven method in newer subdivisions with newer trees but they found out it wasn’t viable for trees of this maturity.

“Our experts were telling us that the trees were not going to survive,” says O’Connor, “that even if they did survive, the impact to roots was going to be a hazard on the trees and that they would potentially fall down.”

The fight to saves these trees is growing its own roots.  There's a petition planned and the Deadmans hope to hire a surveyor to prove they own even a small part of the trees.

Deadman says, “I think the city should go to them and say, “Let's look at other options. These are important trees for the community.  They're important and they should be saved. We haven't explored all our options, right?”

The city says the issue is in the development review process.

“The City of Ottawa makes all efforts to preserve trees through the implementation of the Urban Tree Conservation By-law,” said Charmaine Forgie, the Manager of Business Support Services, Planning, Infrastructure & Economic Development in an email, “The City is currently reviewing all factors relating to the tree removal application submitted for Greystone Village, including arborist reports and property surveys.”

The city has put this fight on hold for a couple of weeks.  It has extended the deadline to August 15th before deciding whether the axe will fall on this tiny forest.