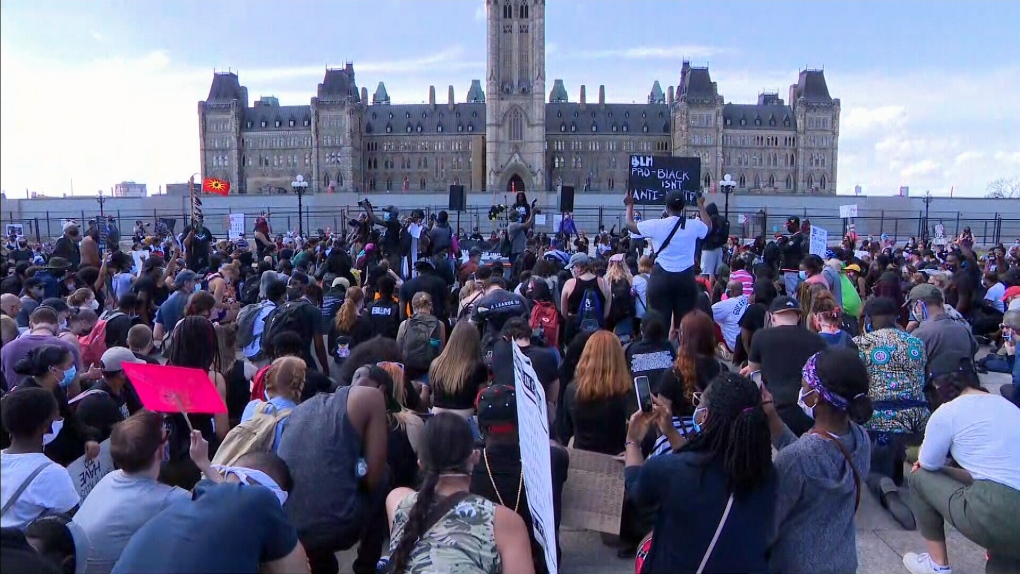 The crowd takes part in 8 minutes and 46 seconds of silence in tribute to George Floyd at the 'No Peace Until Justice' march on Parliament Hill in Ottawa on Friday, June 5, 2020.

OTTAWA -- Ottawa's medical officer of health, Dr. Vera Etches, says she is not aware of any known COVID-19 cases that have been linked to a Black Lives Matter demonstration in early June.

"I'm not aware of any cases that have been determined to have occurred because of the event," Dr. Etches told reporters Wednesday following City Council.

Thousands of people, including Prime Minister Justin Trudeau, attended the "No Peace Until Justice" march in downtown Ottawa June 5, which moved between Parliament Hill and the U.S. Embassy on Sussex Drive. The event was held to mark the death of George Floyd in Minneapolis, Minn. and to speak out against police brutality and anti-Black racism.

There were concerns ahead of the march that the volume of people expected to attend could cause a spike in COVID-19 cases.

Associate medical officer of health Dr. Brent Moloughney said in the days leading up to the demonstration that attendees should wear masks, try and keep as much distance as possible between themselves and others, and to consider signs and noise makers in place of shouting, to limit droplet spread.

Anyone who attended and began to feel sick was encouraged to get a COVID-19 test as soon as possible.

It was expected to take up to two weeks before cases linked to the march would surface. Since June 19—14 days after the march—Ottawa's daily numbers of new cases have been in the single digits.

In the two weeks since the march, per-day testing numbers have been between 378 and 1032 tests per day for Ottawa residents at select laboratories, according to Ottawa Public Health's COVID-19 dashboard.

Dr. Etches said after the June 10 council meeting that OPH would inform the public if any cases linked to the march were confirmed so that attendees could take all necessary precautions.

A second "March for Black Lives" demonstration was held outside Ottawa Police headquarters and Ottawa City Hall last Saturday, with more than 1,000 people in attendance.