No dancing, no mingling, and quiet music: how bars will change in Stage 3 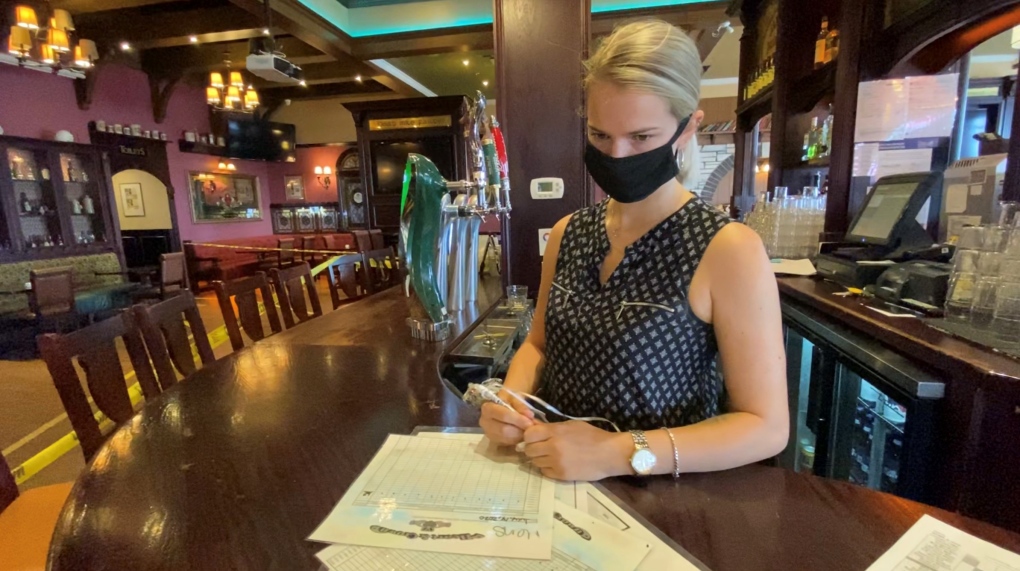 OTTAWA -- This Friday, bars in Ottawa will be allowed to serve guests inside, but the atmosphere will be different.

Under the Ontario's reopening framework, occupancy for bars will be limited by the amount of space available, as each table must be at least two metres apart.

Ottawa will officially enter Stage 3 at 12:01 a.m. Friday, which will allow bars in the city to welcome guests back inside for the first time since the pandemic began.

However, dancing is prohibited, except in the case of live performers hired by the establishment, and mingling will not be allowed.

Masks are required in all indoor public spaces in Ottawa, but can be temporarily removed to eat or drink.

Barrhaven Heart and Crown manager Hollie Butcher tells CTV News she is preparing measures which include limiting groups to six, putting down floor markers, and sanitizing chairs and tables after each use. Hours will also be reduced.

"Before COVID, we were very used to our nightlife having live bands and that stuff. We always had a great dance floor going on the weekends," Butcher says. "Things are going to look very different for this time."

Butcher says that the pub hopes to have live entertainment back on the stage in the coming weeks, but it will be more subdued.

"In the past, with live music, they were forcing people to speak louder," says Butcher, "which increases, as we would say 'speak moistly' at this point, so we’re looking to lower that level a little bit just to have casual dining music where you can carry a conversation without having to elevate your voice."

Ottawa Public Health does permit the removal of masks to eat and you can keep it off if you are in your social bubble of 10, but it is recommended you keep you mask on whenever possible, and put it on when leaving the table.

At the Barley Mow, in Barrhaven, similar measures will be put in place.

Leanne Smith, who is enjoying a beer with a friend on the patio, she says she is ready to head back inside but for others on the patio, like friends Sandra Garvey and Jemma Aveling, it's too early.

"You know, the moist speaking," says Garvey, "choking on your drink or whatever, just even perspiring in a space like that. You know people are sweaty and I think you should have your mask on when you can’t be physically distancing."

Aveling agrees, saying, "Even if you implement the six feet thing, not everyone will stay six feet away and the masks are just an extra barrier between you, that you need to have, I think."

Bars have been blamed for the spread of COVID-19 infections in other jurisdictions.

In Montreal, public health authorities confirmed that at least 13 people tested positive for COVID-19 after going to a bar on the island.

In the United States, where cases are surging in the thousands, bars that had only recently reopened were ordered to close again.

All the more reason for Butcher to say the Heart and Crown will be asking patrons for contact information to be used in the event contact tracing is required.

However, it will not be mandatory.

"We're not pushing anyone to do this. It's completely up to you," she says. "If you'd rather pass, that's no problem at all. It just helps connect us all a bit little more at this time. If there was a problem, it gives us the opportunity to reach out and do our part to stop the virus at that point."

A previous version of this article said bars would be capped at a maximum of 50 people, but it is more accurate to say occupancy is limited by the amount of space required to keep all tables two metres apart.