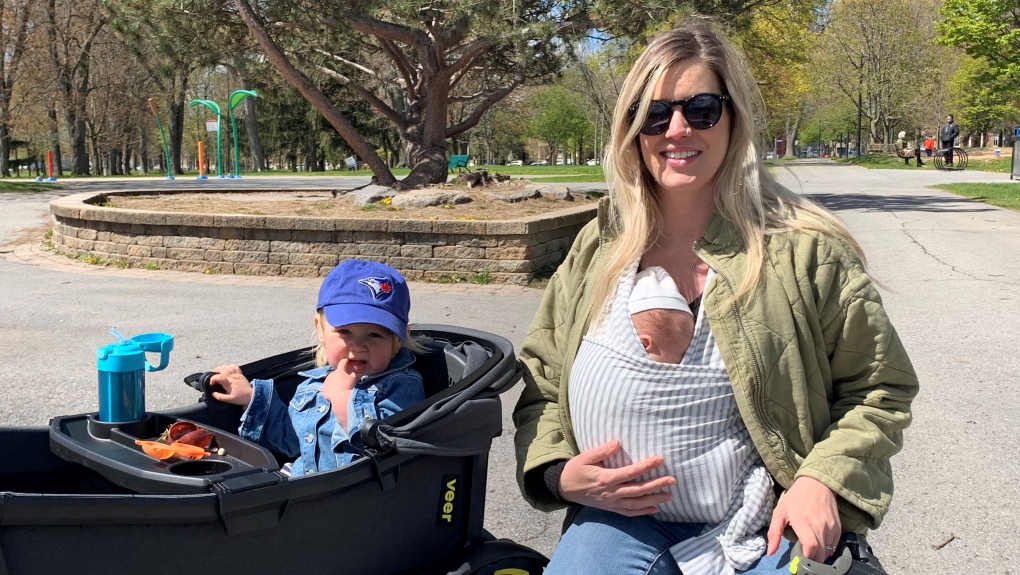 KINGSTON, ONT. -- A new mom in Kingston says she’ll be forced to end her maternity leave early because of the Ontario lockdown and rules around employment insurance.

Amber Young says she thought her maternity leave with her newborn son, Wolf, was going to be a year of spending days together at the park and marking milestones.

Young, a hairstylist, was one of many forced onto EI benefits for six weeks last Christmas, after the province of Ontario shut down in an effort to curb the pandemic.

However, because she made those claims, she says her leave will end three months earlier than planned.

“I feel a little a little bit like, robbed essentially of time with my son my newborn son,” Young tells CTV News Ottawa in an interview.

She says since EI and maternity leave fall under the same umbrella at Service Canada, she was told by officials at the department that her benefits run for a year from when she first claimed EI, regardless of when she gave birth.

“They explained to me that it’s 52 weeks maximum that you can qualify for EI in a calendar year so I’m forced to go back to work, essentially, three and a half months early from this maternity leave,” she says.

Young says that those months are pivotal as a new mother.

“I’m going to lose time with him that I’m never going to get back in his first year of his life,” she explains. “The walking, the starting to talk, that essentially happens at the end of the maternity leave.”

In a statement to CTV News Ottawa, Service Canada says, in response to the pandemic, they have shortened the required hours it takes to qualify for benefits, and extended the number of weeks available to claim EI.

“The EI program complements other programs to support Canadian families, such as the Canada Child Benefit that helps with the cost of raising children. There have been several changes to the EI program and other supports during the pandemic to ease financial pressure on workers. We are continuing to adapt the supports available to families and workers,” writes media relations officer Saskia Rodenburg.

New parents are also entitled to take 18 months of maternity leave if they decide to extend it. The payments remain the same in total, but are spread out.

Young says that means she would only receive a third of her pay during the year, and her company doesn’t provide any extra support. She says, with two young kids, it’s just not possible for her family.

“I have bills to pay, children to feed,” says Young.

Young says she wants to warn other soon-to-be parents they may face the same barriers, and is calling on the government to make a change.

“I would love the government to relook at their policy regarding specifically mat leave and COVID times, make it so moms aren’t losing out on their mat leave because of COVID,” she says. “I’m not asking them to change it indefinitely, just during this unique pandemic situation.”

More than 17,000 vaccines administered Monday in Ottawa, a new record