I hope the NBA boycott is the moment that sparks serious change: Redblacks wide receiver 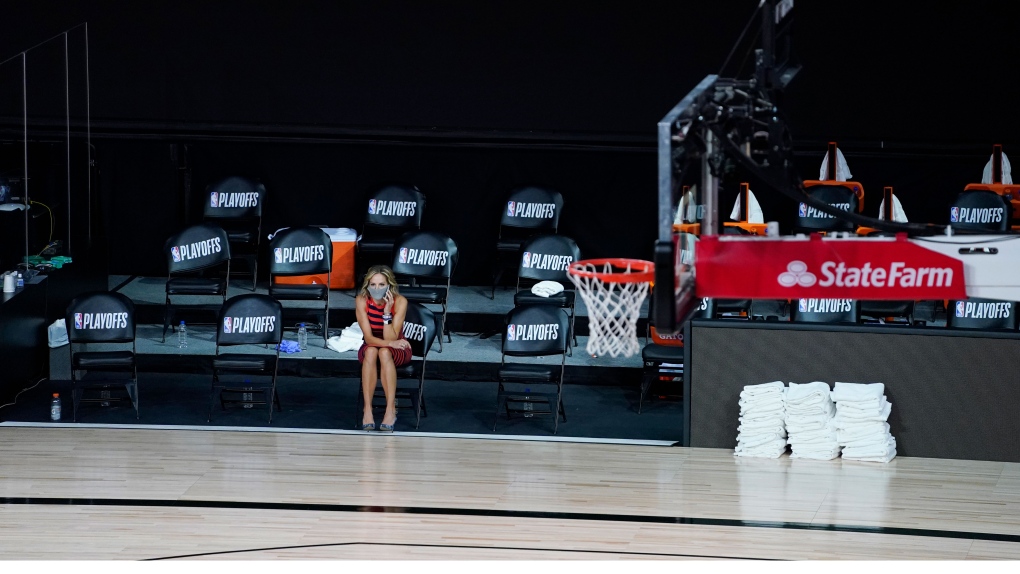 A reporter sits beside an empty court after a postponed NBA basketball first round playoff game between the Milwaukee Bucks and the Orlando Magic, Wednesday, Aug. 26, 2020, in Lake Buena Vista, Fla. The game was postponed after the Milwaukee Bucks didn't take the floor in protest against racial injustice and the shooting of Jacob Blake, a Black man, by police in Kenosha, Wisconsin. (AP Photo/Ashley Landis, Pool)

"When the history books read back on the many chapters of 2020, and there will be many, I do think that the people who played hockey yesterday are going to be feeling some shame," said Behar in an interview with CTV News Ottawa.

The Milwaukee Bucks refused to play Game 5 of their NBA playoff series against Orlando on Wednesday afternoon to protest the shooting of Jacob Blake, a Black man who was shot in the back multiple times by police in Wisconsin.

I will never forget the day Major League Baseball was willing to stand for something, and the National Hockey League just kept on skating. Pathetic.

Behar says he is hoping the move will lead to serious change.

"Athletes should not be the ones responsible for fixing this, but the fact that they were willing to stop, and in a sense they stopped the world, to look at how it can be fixed, I hope it's the moment that sparks it all," said Behar.

Ottawa Senators forward Anthony Duclair and members of the Hockey Diversity Alliance called on the NHL to suspend all playoff games on Thursday.

"We strongly feel this sends a clear message to that human rights take priority over sports. We should not stay silent towards systemic racism and any racial inequalities in our society," said Duclair on Twitter.

At 6 p.m., the NHL announced playoff games scheduled for Thursday and Friday would be postponed.

"After much discussion, NHL players believe that the best course of action would be to take a step back and not play tonight's and tomorrow's games as scheduled," the statement from the NHL and the NHL Players Association said.

"The NHL supports the players' decision and will rescheduled those four games beginning Saturday and adjust the remainder of the second round schedule accordingly."

The statement says, "The NHLPA and NHL are committed to working to foster more inclusive and welcoming environments within our arenas, offices and beyond."

We the @TheOfficialHDA have formally requested the @NHL to suspend all playoffs games today. We strongly feel this sends a clear message to that human rights take priority over sports. We should not stay silent towards systemic racism and any racial inequalities in our society.