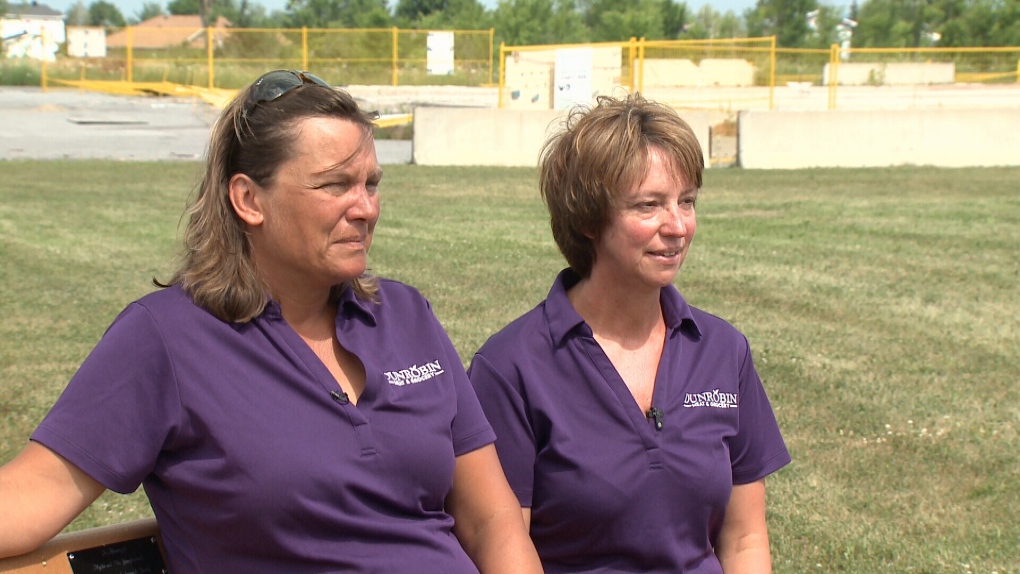 From the corner of Dunrobin Road and Thomas A. Dolan Parkway, the Delahunt sisters look around and realize there is a lot of family history.

“This whole corner for us is where we’ve grown up,” says younger sister Julie.

Julie, along with her sister Cindy and their brother Jeff grew-up in an entrepreneurial family.   Their grandparents owned Younghusbands store before their parents Ellen and Charles Delahunt took it over in 1979.  The building was eventually torn down in 2008.  But years before that, Ellen and Charles had built a mall next door.  That’s where Julie and Cindy would open their own butcher shop in 1989.  Over the years, the store evolved from meat to groceries and movie rentals.  On September 21st all of that hard work disappeared in seconds.

“It’s a blur a bit that day,” says Cindy holding back tears.

The tornado that ripped through Dunrobin seemed to hit the mall straight on, ripping the roof off while the sisters and their customers were huddled inside.  One customer was seriously injured but has since recovered.  Everyone survived. But the store they owned for thirty years, Dunrobin Meat & Grocery, did not.

Now ten-months later, the sisters hoped they’d be close to moving back in, moving on, getting their livelihoods back, but they are nowhere close to that.  The pair seems to be the victims of a tug of war between their landlord and the city of Ottawa.

“I don’t know if the city is just really backlogged or if the landlord is not putting in all the applications he needs to, it’s just a real waiting game, no one seems to have all the answers,” says Julie.

The mall’s landlord says he’s applied for building permits, ones he claims he was to receive back in March but it didn’t happen.  He calls the city permit process “frustrating” but says he can’t rebuild without it.

The city councillor for the area, Eli El-Chantiry, says city staff has been working with the landlord to get the permit as quickly as possible.

“What I hear from our staff is the deficiency isn’t a huge deal, they submitted it back to the owner and they believe the owner is taking care of those deficiencies,” says El-Chantiry.

“I can promise you one thing,” the councillor goes on to say, “any application, whether from the mall or a homeowner affected by the tornado, if they apply to the city we committed to expedite their building permit and also waive the fees.”

The Delahunt’s don’t know who’s to blame for the delays, and at this point say it doesn’t matter, they just want to get back to work.  The pair says they’ve lost income and worry they’ve lost customers too.

“My regular customers have all got new routes to work now,” says Cindy.

“Everybody just says they’ll come back and they can’t wait to come back,” Julie says with optimism.

But like the Delahunts, Julie says the customers will have to wait,

“They say it will probably take six months to build so we probably won’t be back until next year.”