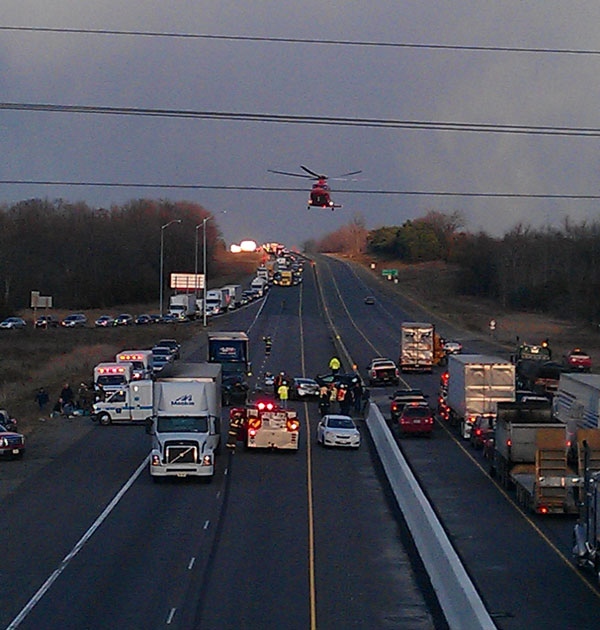 An air ambulance is seen hovering over the scene of a major accident on Highway 401 neat Trenton Thursday, Nov. 17, 2011.

A male driver from the Cornwall area is dead after a multi-vehicle crash on Highway 401 in Trenton Thursday afternoon.

OPP said Friday they're still investigating the cause of the crash, which happened around 3:20 p.m. Thursday.

It involved a tractor-trailer carrying dates and five other vehicles.

They said an off-duty police officer was able to help immediately at the scene, along with several motorists with fire extinguishers who helped rescue a dog from a burning vehicle.

Two people who suffered "moderate" injuries have been released from hospital, and police said a person who was airlifted to the Kingston General Hospital has been upgraded to serious but non life-threatening condition.

An inmate travelling in a Corrections Canada vehicle suffered minor injuries in the crash.

Traffic was stopped in both directions as the load of dates and other vehicle debris was scattered across the highway.

The eastbound lanes opened about two hours after the crash and the westbound lanes re-opened just before 2 a.m. Friday.

OPP said they haven't released the victim's name yet because all his next of kin haven't been notified.