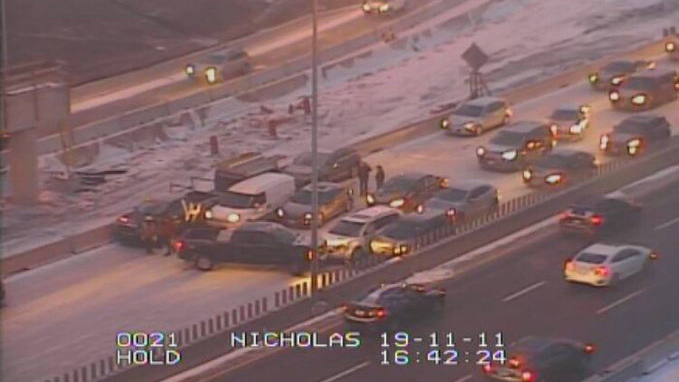 Credit: Ontario of Ministry of Transportation

OTTAWA - The City of Ottawa is urging motorists to give themselves some extra time to get to work and school today.

The first snowstorm of the season dropped 14.4 cm of snow on Ottawa Monday night and Tuesday morning, blanketing roads and sidewalks.

City and MTO snowplows were deployed overnight to clear roads for the commute.

Take it easy out there today! And tune in to @CTVOttMornLive for weather and traffic updates. #otttraffic #ottnews pic.twitter.com/bnXNUflBfq

As the snow started to fall on Monday afternoon, a crash involving multiple vehicles snarled traffic on the eastbound Queensway at Nicholas.

Paramedics confirm at least 6 vehicles are involved. Two people were transported to hospital with undisclosed injuries.