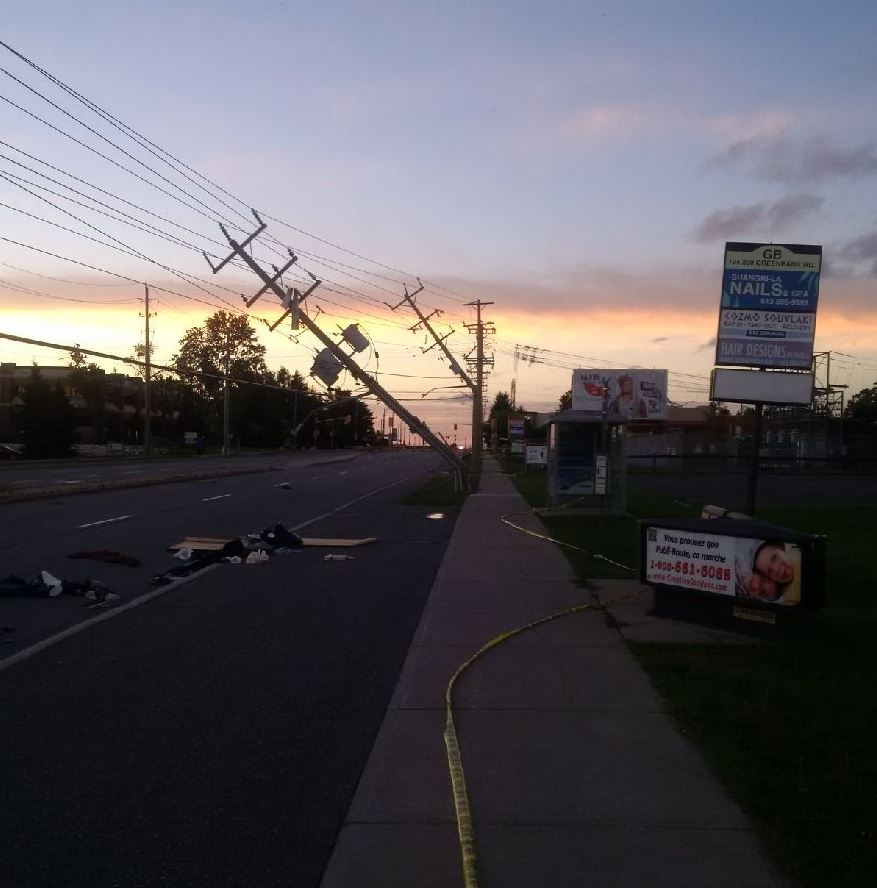 The clean-up is underway after a tornado and major storm hit eastern Ontario and western Quebec on Friday afternoon.

Here is an update on information:

Hydro Ottawa is reporting 171,462 customers are without power across Ottawa (as of 7:20 a.m.). There are 200 power outages across Ottawa.

The utility says more than 80 hydro poles are down/damaged following the storm.

Councillor Jan Harder tells News Talk 580 CFRA that all 90,000 customers in Barrhaven are without power.

Hydro One is reporting power outages across eastern Ontario.

For information on power outages across Hydro One areas, visit www.hydroone.com

Hydro Quebec reports 44,829 customers are without power across the Outaouais.  There is no word on when power will be restored.

The City of Ottawa says it has received numerous calls about fallen trees and storm debris across the city. Staff say crews are “working around the clock to get to these areas.”

There have been numerous calls about fallen trees and storm debris across #OttCity. Our team is working around the clock to get to these areas ASAP. Please only call 3-1-1 or 9-1-1 if it's an emergency. #OttCity

The City of Ottawa says residents in the Hunt Club/Riverside area can go to an emergency reception centre at the Canterbury Recreation Centre on Arch Street.

OC Transpo says the O-Train Line 2 is out of service today because of city-wide weather-related outages. Bus Route 102 is running in its place.

Sgt. Mark Gatien tweeted all the traffic officers have been deployed to locations where tornadoes touched down on Monday.

The NCC says Gatineau Park is closed "until further notice" following the storm.

The Ottawa Airport says it's still operating on back-up power, but operations are up and running. There are some cancellations and delays on the board.

If you’re scheduled to fly today, check with your carrier before coming to the airport - there are some cancellations and delays. We are still operating on back-up power so there are reduced food and beverage services. Thank you for your patience and understanding. #OTTstorm