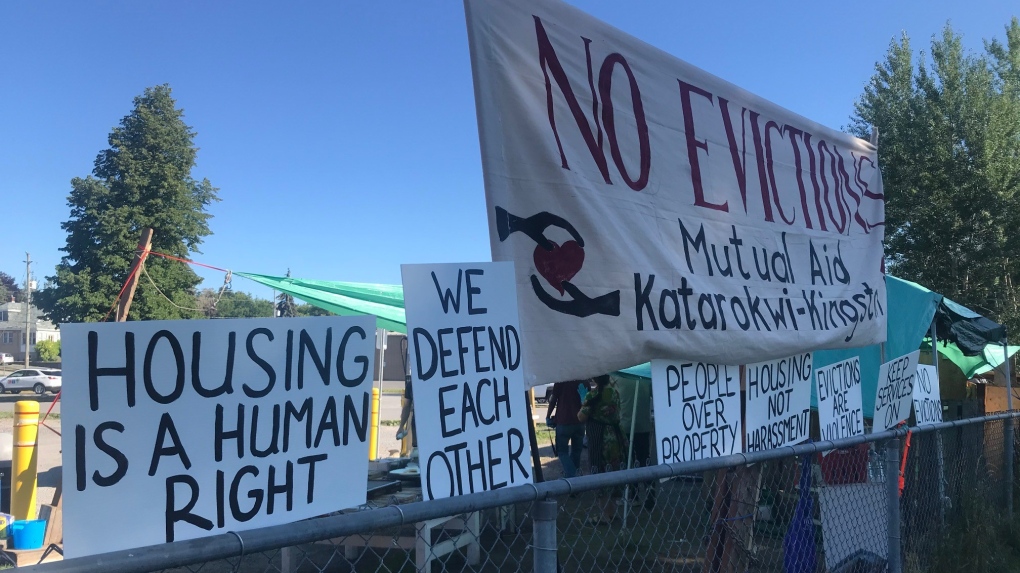 Signs at a temporary campsite at Belle Park in Kingston, calling on the City to find proper housing solutions for the campers. (Kimberley Johnson / CTV News Ottawa)

The City provided the services to about 30 people living in the tent city that had sprung up at the park that sits off Montreal St., in May to help them through the COVID-19 pandemic.

City Council had given campers until July 31st to leave the grounds, but those that lived there said they were waiting on housing accommodations, and hoped to stay until those could be found.

City officials have insisted the site is not suitable to live on because it sits on an old landfill, and allowing campers to stay there was always a temporary solution because of the pandemic.

In a release Tuesday, the City of Kingston’s CAO Lanie Hurdle says officials are continuing to work to find housing for the campers who remain.

“We are doing everything we can to avoid evictions while implementing the Council decision to not allow camping at Belle Park after July 31st,” writes Hurdle. “The announcement last week and the planned removal of these services are meant to encourage those who are still in Belle Park to seek out one of the interim housing options being offered, as it is no longer legal to camp in any Kingston park.”

The City says later this week officials will begin cleaning up the park for public use.

Following the move, supporters of the Belle Park encampment said the city is removing the people living there without providing “meaningful alternatives.”

In a statement, Toni Thornton, member of Mutual Aid Katarokwi-Kingston called on the City to return the services.

Drop-in Centre to be discussed at Council

A new location for the city’s Integrated Care Hub is set to be discussed at City Council on Tuesday.

The city has been encouraging those living at the Park to use its services.

The drop-in centre opened at the Artillery Park Aquatic Centre in late July.

The 24-hour shelter will be run out of the Aquatic Centre, at 382 Bagot St., until the end of September. The city says Council will be receiving a recommendation for a more permanent location in a report Tuesday night.