BROCKVILLE, ONT. -- When the Keystorm pub in downtown Brockville reopened for takeout, owner Dan Thompson and his staff thought up a unique promotion.

"We came up with the idea that if we had a customer that would buy a 20 dollar gift card for dine-in purposes after we reopened, then we would take a 10 dollar gift card and donate it to a person of their choice who worked on the front lines," Thompson said. 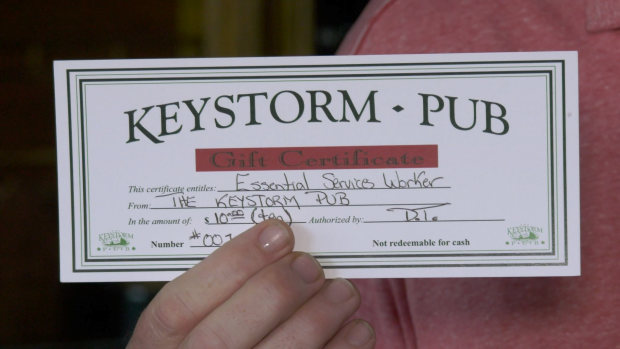 A post was made on social media, and it took off like wildfire. Over the past ten days, Thompson and his crew have delivered more than 500 gift cards that can be used anytime for take-out and delivery, when it is up and running, or in-house when the pub reopens.

"A lot of people don't consider themselves a front-line worker or an essential worker but they're the ones that have been keeping us moving and able to move all through it," said Thompson. "When you walk in to a gas station for example and ask for one of the attendants and give them a card, they're just, blown away. A couple a times we were up at the COVID test centre. The staff there were speechless."

The pub was closed for almost seven weeks. Thompson said he never had to lay anyone off in 17 years.

Kim Martin is the area director at Bayshore Home Care Solutions in Brockville and had cards dropped off for her and her staff last week. 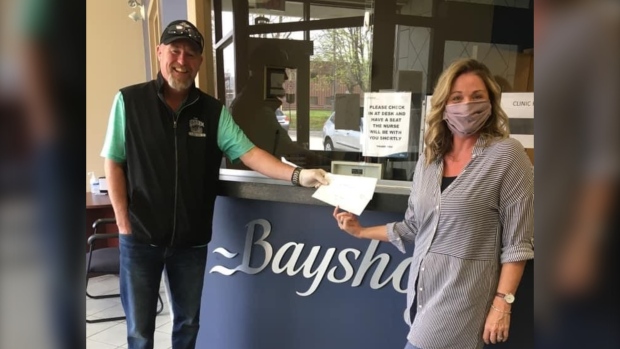 "It was really great and made me feel quite special. Made my day, my week, and my month! So it was really, really great," Martin said. "The message that we have received here at Bayshore is that our community is here and it supports us. It's been challenging the last 10-12 weeks, you know, everything came to an abrupt stop and its all about adapting and going through these changes but really coming together as a community and supporting each other."

Mary Ann Keary is a real estate broker in town and donated 200 dollars to the Brockville police.

"Those guys are on the front lines. I think they have a really tough job. I don't think they get nearly enough praise for all that they do," Keary said. "Dan's giving inspired me to do the same and I wanted to support people on the front line that everyday they are putting their life at risk, going out there helping us."

The gift cards have been dropped off at places like funeral homes, grocery stores, mechanic shops and long-term care homes.

Thompson said he and his staff have been overwhelmed at the support from the community.

"The outpouring of support has been unbelievable. We've had friends from Kingston call, friends from Athens, friends from Ottawa, people who don't get to Brockville on a regular basis, and they've just called and say hey can you please put me through for 200 dollars and give them all away," Thompson said.

"I'd like to extend a huge thank you to the support of the whole city. From city council to the first responders to all of the long-term care health workers and everyone who has donated. Thank you for everybody for everything you've done."

"I'm so thrilled that I live in Brockville. I wouldn't want to live anywhere else," added Keary.