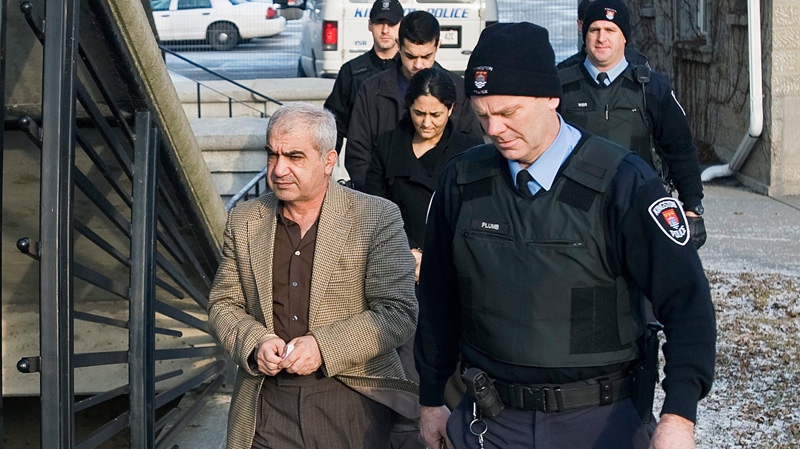 KINGSTON, Ont. - Three members of an Afghanistan-born Montreal family were defiant Sunday in the face of life in prison and harsh condemnation for the murders of three daughters and a co-wife apparently motivated by what the judge called their "twisted concept of honour."

A jury took 15 hours to find Mohammad Shafia, 58, his wife Tooba Yahya, 42, and their son Hamed, 21, each guilty of four counts of first-degree murder in a so-called mass honour killing that has captivated Canadians from coast to coast, and touched off post-911 criticism of Muslim culture.

The three immediately pronounced the verdicts as unjust, but the judge was unmoved, cutting right to the core of the cultural cloud that hung over this case.

"The apparent reason behind these cold-blooded, shameful murders was that the four completely innocent victims offended your completely twisted concept of honour...that has absolutely no place in any civilized society."

The trial heard evidence over many weeks about the bizarre divide in the Shafia family, in which the patriarch struck fear in the hearts of some of his children, though often being away on business Hamed acted as the surrogate disciplinarian. The three murdered daughters thumbed their noses at the family rules. The children they did not kill were the ones ratting out their sisters to their parents for bad behaviour, court heard.

It was notions of honour, directly tied to women's sexuality and general control over their behaviour, that led the Shafias to kill, court heard, in an effort to cleanse them of the shame they perceived their daughters to have brought upon them.

The concept is in stark contrast to Canadian values, the Crown said. The idea that such thinking had not only been brewing in one of Canada's most cosmopolitan cities, but that this "honour" apparently superseded the value of life for the Shafias has shocked many.

But investigators who pored over the details of the disturbing inner workings of the Shafia family and examined the tiniest pieces of evidence from the crime scene urged people Sunday to remember the victims.

All that sisters Zainab, 19, Sahar, 17, and Geeti, 13, and Rona Amir Mohammad, 52, their father's childless first wife in a polygamous marriage wanted was freedom, and it cost them their lives, court heard.

Their bodies were found June 30, 2009, in a car submerged in a canal in Kingston, Ont., in a multiple murder the Crown asserted was committed to restore family honour, lost when the girls began dating and acting out. Rona was simply disposed of, the Crown said.

The jury's verdict indicates the seven women and five men believe Shafia, Yahya and Hamed plotted to kill their troublesome family members, dumping their bodies in a canal and staging it -- albeit clumsily -- to look like an accident.

The three now-convicted multiple murderers did not accept their fates quietly.

"We are not criminal, we are not murderer, we didn't commit the murder and this is unjust," Shafia said through an interpreter when the judge asked if he had anything to say.

Yahya, who spent a withering six days on the stand testifying in her own defence, was similarly assertive.

"Your honourable justice, this is not just," she said, also through an interpreter. "I am not a murderer, and I am a mother -- a mother!"

Hamed said in English: "Sir, I did not drown my sisters anywhere."

During the three-month trial Hamed was the only one of the three never to betray any emotion, but as it became clear he could face life in prison, the young man put his head in his hands and hunched over in the prisoners' box while his parents rubbed his back. Yahya soon began to cry.

First-degree murder carries an automatic life sentence with no chance to apply for parole for 25 years. The family has been behind bars since their arrests on July 22, 2009.

Outside court, Crown attorney Gerard Laarhuis said the verdict is a reflection of Canadian values that he hopes will resonate.

"This jury found that four strong, vivacious and freedom-loving women were murdered by their own family in the most troubling of circumstances," he said.

"This verdict sends a very clear message about our Canadian values and the core principles in a free and democratic society that all Canadians enjoy and even visitors to Canada enjoy," Laarhuis said to cheers of approval from onlookers.

Laarhuis was interrupted in his remarks by Moosa Hadi, a central figure in the case who was a fervent supporter of the Shafias. He sent reporters and the lead investigator emails stating that the prosecution of the family was criminal and because of it he is suffering from post-traumatic stress disorder.

"This is a lie, this is absolutely a lie," Hadi shouted over Laarhuis before being pulled away by tactical police officers. "This is a miscarriage of the justice."

Members of the public listening to Laarhuis' statement, many of whom have attended the trial from the Oct. 20 start, shouted Hadi down and cheered as Laarhuis continued.

"They gave these victims a voice when they had none and so I appreciate their work," he said outside court.

Shafia's lawyer, Peter Kemp, said after the verdicts that he believes the comments his client made on wiretaps calling his dead daughters whores and saying there is no value of life without honour, may have weighed more heavily on the jury's minds than the physical evidence in the case.

Hamed's lawyer, Patrick McCann, said he was disappointed with the verdict, and said his client will appeal and he believes the other two will as well.

"I still have a hard time understanding how the Crown theory could actually have happened," he said.

The Crown theory was that Shafia, Yahya and Hamed drowned the four victims either to the point of death or unconsciousness, placed their bodies in the car, then pushed it into the canal using the family's other vehicle. However, prosecutors couldn't prove how or where the pre-drowning happened.

The defence had said it was an accident, that they had gone for a joy ride with Zainab driving and accidentally plunged into the canal with Hamed watching, although he didn't call police. Hamed's lawyer told the jury his client was only guilty of being stupid, but the jury clearly thought otherwise.