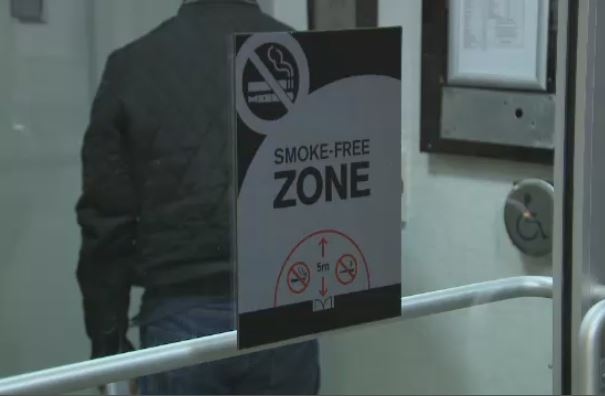 One of Ottawa’s largest private landlords is going 100% smoke-free.

Minto Apartments notified its residents on its buildings on Meadowlands Parkwood Hills it is transitioning to be “free of smoke and cannabis cultivation.”

Residents were given a letter Tuesday that the new rules were going into effect Oct. 17th- the same day pot became legal.

Parkwood Hills resident Hameed Khorami is glad is building is going smoke-free, after he says the smell of smoke was drifting into his apartment. “When the windows were open we could smell and it was bad. Especially with children I don’t think it’s healthy”

He says, “We were thinking of moving from this place.”

Tenants are prohibited from smoking tobacco, cigarettes, cannabis or the burning, smoking or vaping of any substance within the boundaries of the complex.

Resident Brianna Gale says she welcomes the ban. “It’s nice because you could actually smell the different smokes coming up through the vents from different apartments. I’d be in my room or bathroom and you could smell all types of smoke.”

Even some residents who smoke say they are okay with the new rules- saying the rules weren’t clear until now. “There was none- it’s not even on the lease... I read the lease because we got the marijuana warning. And I read my lease and I have been here five years.”

Saying, “As Minto Apartments continues its transition to smoke-free buildings; we have updated our rules around smoking and cannabis cultivation and communicated with our residents. Aligned with the Smoke-Free Ontario Act, as well as bylaws enacted by many municipalities, our smoke-free policy will help to provide a safer and healthier environment for all residents, employees and service personnel.”

Minto says an exception will be making accommodations for a person under the provisions of the Human Rights Code.