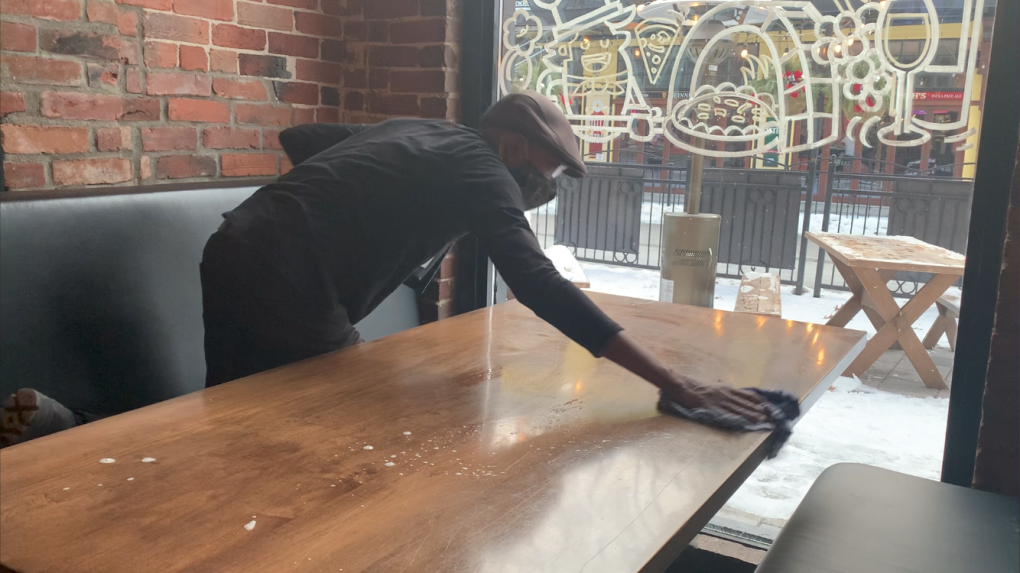 An employee prepares a table for the next guests at a restaurant in Ottawa's ByWard Market. (Jackie Perez/CTV News Ottawa)

When the clock strikes midnight on Jan. 1, new rules come into effect in Ontario.

Rilett says while the minimum wage for liquor servers is $12.55 an hour, tips increase their pay to $40 to $50. The wage increase announced in November added more strain to business owners forced to close or limit capacity in the recent months.

"Usually we count on holiday season to get us through January, February slow months," said Rilett. "That’s all gone. We don’t have the savings."

Also coming into effect in 2022, the new Staycation Tax Credit.Ontario residents can apply for a refundable credit of up to 20 per cent or $200 or $400 on eligible accommodations within the province. This incentive providing a much needed boost for the travel and tourism industry, according to the Ottawa Gatineau Hotel Association.

"I look at Ottawa’s situation; we got Winterlude around the corner, skating on the canal in February," said Steve Ball, president of the association. "It’s a great time to take advantage of the great outdoor activities, would be a great opportunity to promote a staycation package within Ontario."

"I would use the staycation. I just bought a car and will drive around northern Ontario," said Daniel Kamara, keen on the $200 return.

"Why not use it if it’s offered to me,” said Melissa Winchester who was out in the ByWard Market with her two sons and partner. "I feel like the money could be spent on other things given Omicron and our health care system can’t handle it."

There are more changes coming in 2022.

Ontario residents can expect the launch of the province’s Digital ID program. This allows Ontario residents and businesses to prove who they are both online and in person without using a physical card. A launch date has not been announced but the government says the Digital ID could offer more privacy than a physical ID.