MERRICKVILLE, ONT. -- Just southwest of Ottawa, one couple has grown their small business from the family kitchen into a pandemic success story, and they are savouring every moment.

Known for their handmade caramels made fresh every Tuesday, Pickle & Myrrh has grown a customer base around the world.

"The sea salt caramels are definitely the most popular," said owner Erin Kergan. "There's something that's so wonderful about the creamy and savoury sweetness of them that people really like."

Kergan fiddled with the recipe when she lived out west near Water Valley, Alta. She sold them at farmers' markets a few times a year.

"I just made them one time for fun while I was mat leave and I handed them out to some friends and people really liked them," Kergan said. 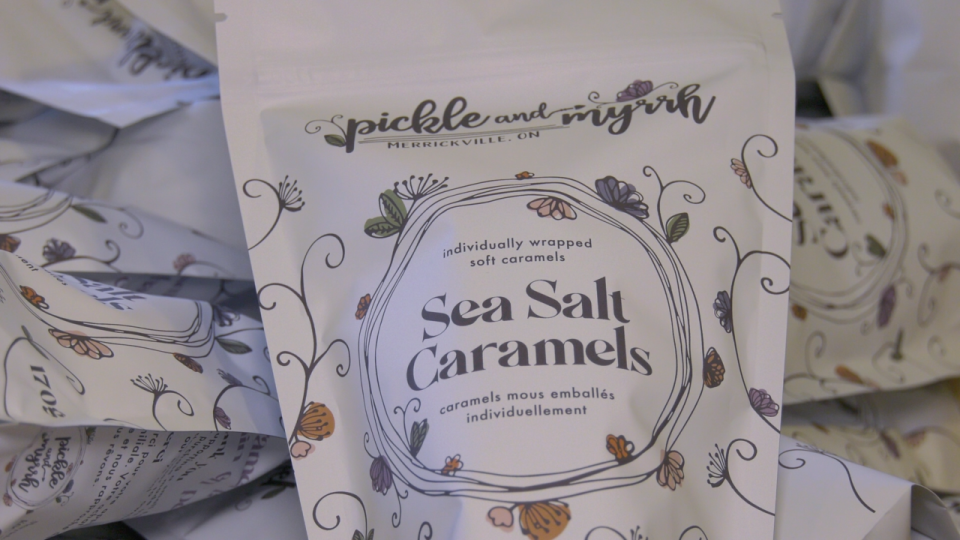 Originally from Brockville, she moved back to Ontario with her five-year-old daughter while her husband kept his quarry fly-in job in Alberta.

"We had a young family and we thought, why not, for the next five years, go to Ontario and be close to our family so our daughter can grow up with cousins and we just settled in Merrickville and it's been wonderful," Kergan said.

Still making caramels at home, she noticed a lease sign on a storefront in the village. Her aim was to sell her product from October to December in 2020, not thinking the business would boom.

"Within the first 10 days of opening we were just blown away by the support and I definitely needed more help," she said.

She called her husband in Alberta and asked him to quit his job and move home to help the business.

"I was like, 'Well, I'm not sure, a bit hesitant about it,'" said Tyler Kergan, recalling the phone call, "but after seeing how much support that we were getting right off the bat, it was incredible."

He quit his job at a limestone quarry and flew to Ontario, having never worked in retail before.

"I never picked this career path," he said. "I was always involved in equipment and heavy industry, so to be in a kitchen and working in a retail store… It's completely different but it's more fulfilling than any work I've ever done." In total, the couple produces 13 flavours of caramels, such as maple, birthday cake and seasonal pumpkin spice.

Around the store, hundreds of other local products like jams and pottery are for sale, from artists and small business around eastern Ontario and across Canada.

"Merrickville is wonderful. I think there is something so unique about the style and quaintness of it," Erin added. "All of the shop owners now manufacture and work in their shops so there are artists, candle makers and clothing stores here that it's very destinational for people to come and check out the history and the uniqueness of the village."

The Kergans are not only busy in their retail store, but they also ship caramels all over Canada and around the world.

Recent orders went to Nunavut, British Columbia and the Maritimes.

They also make wedding and baby shower favours with their sweet treats.

Local customers love stopping by on their way through the village.

"My daughter-in-law bought me some and they were gone within a half an hour," said Cheryl Cook from Brockville.

"It's a great little store; the staff is fantastic," said Kelly Duvall from Ottawa, shopping with his mother Janice. "I'ts incredibly fresh. I mean, you can't beat these caramels."

The Duvalls say they're trying to support small businesses as much as they can.

"Big box stores have been getting all the breaks. Why can't we pump money into the economy going through local stores and mom-and-pop shops and things like that?" Kelly said. "Like, things that have supported the communities for decades upon decades? I think it's the least we could do for them."

Pickle & Myrrh celebrated their 1-year anniversary on Oct. 16, making more than 400,000 caramels in that span. The store now employs a staff of eight.

"We're just really thankful for the support that we've had. It's been overwhelming and incredible," Erin added. "It's something that we never imagined possible."

"We definitely don't take any bit of this for granted," added Tyler. "It's changed our lives completely. I went from being gone 20 days out of every month to being able to walk my daughter to school every single day and it's incredible."

He also had some advice for others trying to start up their own business.

"Our thing was like, take it seriously, treat it like a business, and take the chance," he said. "We were fortunate that we were in a position that we could take a chance and it worked out. We just put our whole heart and soul into it and it's worked for us."

Pickle & Myrrh is open Tuesday to Sunday at 110 Main St. in Merrickville.