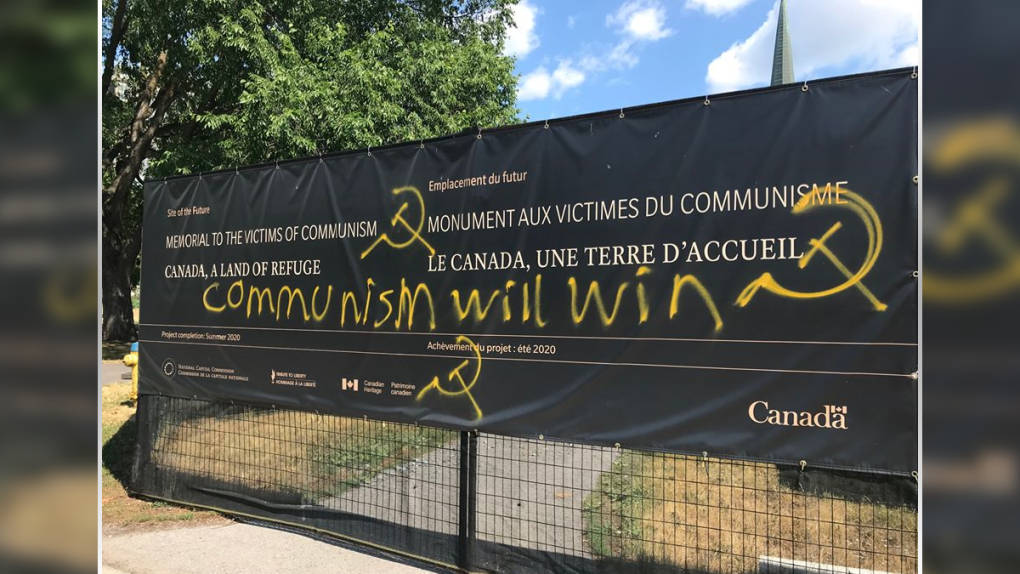 The Ukrainian Canadian Congress shared this photo of vandalism at the construction site of the Memorial to the Victims of Communism. Police are investigating. (Source: Tribute to Liberty Foundation Facebook Page)

OTTAWA -- Ottawa Police are asking for the public’s help after a sign at the memorial to the victims of communism was defaced last week.

The memorial is under construction near the Garden of the Provinces and Territories at Wellington and Bay streets.

Earlier this week, the Ukrainian Canadian Congress shared a photo of the defaced sign, which had ‘communism will win’ spray-painted on it, along with several hammers and sickles.

The UCC called the act a “disgraceful act of vandalism.”

“Millions of people, including many Ukrainians, who were subjected to the brutality and inhumanity of Communism, fled to Canada - where they found liberty and peace,” the UCC said in a news release.

“That this sight was desecrated through this act of hate is unacceptable and deplorable, and an insult to the hallowed memory of the millions of innocent victims of Communism.”

Construction on the memorial started last summer. For a time, it was slated to be built farther east on Wellington Street, near the Supreme Court of Canada building.

But public pressure and opposition to the location led to the memorial being moved to its location near Wellington and Bay streets.