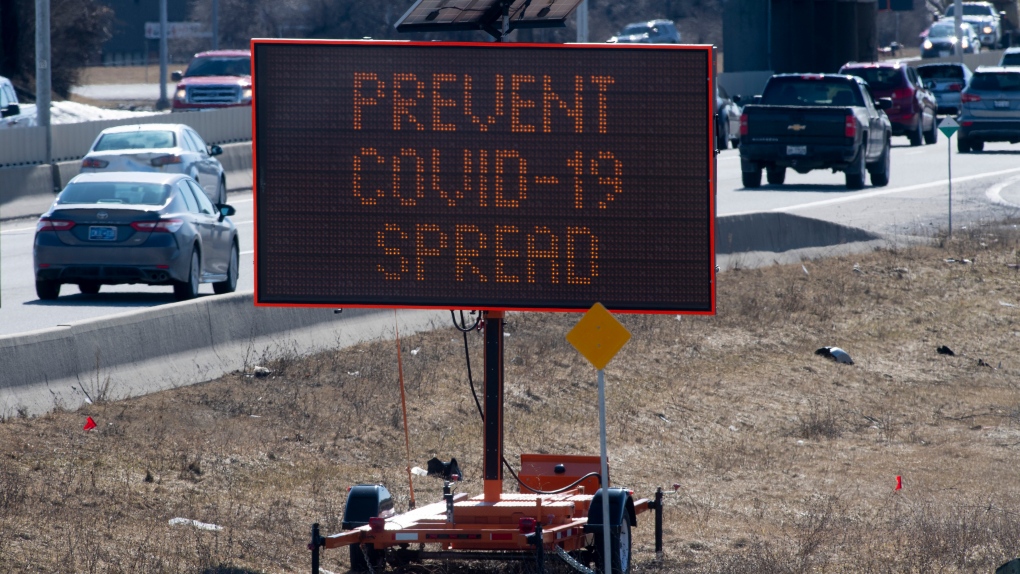 Cars drive along the highway as a sign reminds drivers to stay vigilant about the COVID-19 virus in Ottawa, Friday, March 27, 2020. THE CANADIAN PRESS/Adrian Wyld

OTTAWA -- A detailed memo outlining the Ontario Government's reopening plan believed to be inspired by another country is making the rounds in the Ottawa business community.

But the Ministry of Finance says the memo did not come from the Ontario Government.

Jaden, whose girlfriend's roommate was sent the memo through her work, did a quick internet search and immediately discovered some red flags.

"I just copied and pasted this memo into Google and what pops up is just the re-worded opening plan for Ireland," Jaden said. "They used some of the same terminology such as cocooning and they also say they will be expanding your travelling restrictions from five kilometres to 20 kilometres, which we do not have in Ontario."

Jaden said he wanted to stop this from circulating in the community because misinformation, especially now when things are starting to slowly open back up, is very dangerous.

Co-founder of Hair Republic John Nguyen shared the post with his staff from a private business group on Facebook thinking it was from the Ontario government.

"What I thought to be a reliable source turned out to be unreliable but our purpose was essentially to have open communication with our staff members," Nguyen said. "At the time we had no idea or no news or updates on when our industry would reopen."

The Ministry of Finance confirmed in a statement to Newstalk 580 CFRA that the information in the memo did not come from the Ontario Government.

"On April 27th, the Government of Ontario did issue a media release with regards to reopening the province," writes Scott Blodgett, Senior Media Relations Advisor for the Ministry of Finance. "This 'Framework for Reopening our Province' outlines the government's plan for loosening of emergency measures, as well as guiding principles for the safe, gradual reopening of businesses, services and public spaces."

The most up to date information about Ontario's reopening plan can be found on the government's website.