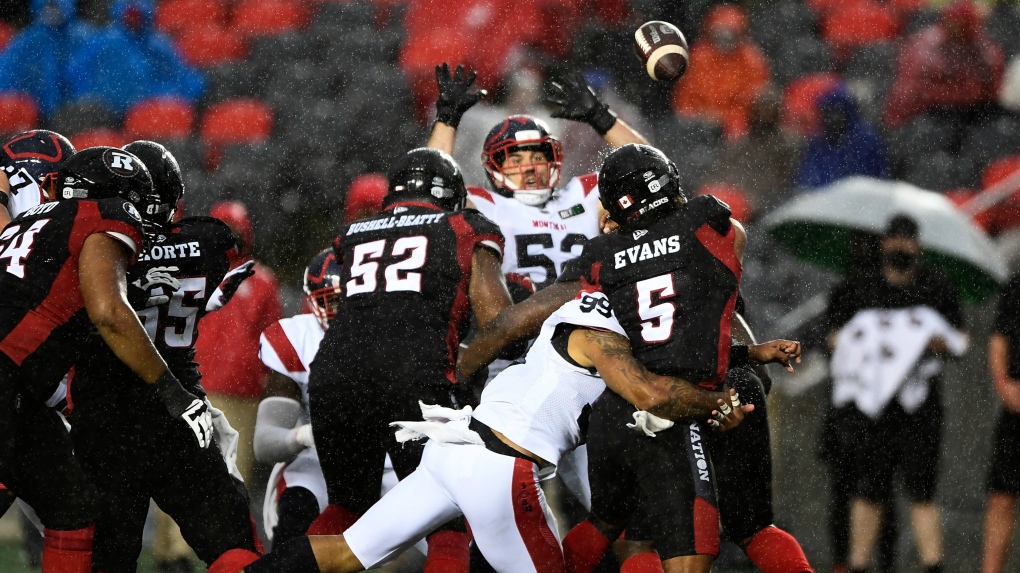 OTTAWA -- The third time was the charm for Matthew Shiltz.

Shiltz threw one touchdown pass and ran for another while David Cote kicked three field goals to lead the Montreal Alouettes to a 27-16 win over the Ottawa Redblacks on Saturday. It was Shiltz's first win in his third career CFL start.

Shiltz got the start for Montreal after incumbent Vernon Adams Jr. (shoulder) was injured in last week's 20-16 win over Ottawa. Shiltz finished 21-of-34 passing for 281 yards.

"It felt great," Shiltz said. "Honestly, I was more nervous on the sideline, but once you cross over those lines, it's almost more calming on the field.

"I was just so proud of how this team played. It was the definition of a team win. The offence slowed down a little bit in the second half but that's when the defence really stepped it up."

Montreal (5-4) assumed sole possession of second place in the East Division with a second straight win over Ottawa (2-8). The Alouettes amassed 393 yards of total offence compared to just 242 for the Redblacks, who started the game with Caleb Evans at quarterback but went to Taryn Christion in the fourth quarter.

Christion was then injured and knocked out of the game on a sack with 1:33 to play. Montreal's defence recorded 10 sacks in the contest.

But Ottawa also lost kick-returner DeVonte Dedmon (right ankle). Dedmon, arguably the Redblacks best player this season, put no weight on his right leg as he was helped off the field in the second quarter.

He returned to Ottawa's sideline in the second half with a walking cast and crutches. Dedmon, who has four kick-return touchdowns in 13 career CFL games, had four kickoff returns for 73 yards and two punt returns for 116 yards Saturday.

"We always preach the most important thing is the turnover margin and we just can't turn it over like we did offensively,"

LaPolice said. "We survived some of the turnovers and obviously created a couple ourselves defensively.

"But you can't be in the negative turnover margin and expect to win."

Montreal took a 25-16 lead into the fourth as the only scoring of the third came on a 43-yard field goal from Ottawa's Lewis Ward with four minutes to play in the quarter.

After Ottawa forced a fumble at its own one-yard line, the Redblacks quickly turned the next play into a safety at 8:43 as Anthony Coombs was tackled in the end zone on a running play.

Ottawa did score 10 points before the end of the quarter. Ward booted a 23-yard field goal, then Evans threw a 14-yard touchdown pass to Kenny Stafford on the final play of the first.

Both scores were set up by punt returns of 69 and 47 yards. Dedmon's status going forward wasn't immediately known following the game.

"On our first drive I dropped one in the end zone, and I wanted that one back," Wieneke said. "That was a great ball by Shiltz,

"I knew if I got another chance I had to come down with it. We made eye contact going deep and I'm not sure how he got it right through the defenders but I'm glad it happened and I'm glad I got another shot to redeem myself."

This report by The Canadian Press was first published Oct. 16, 2021.