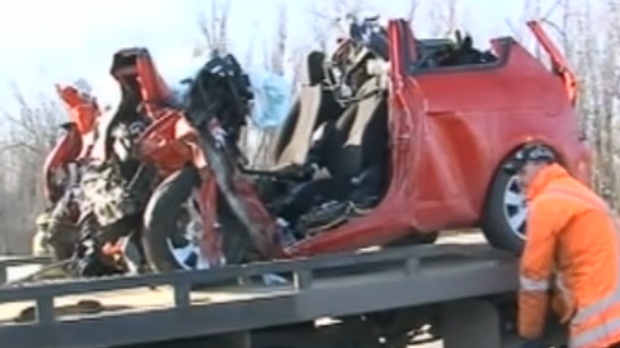 Two owners of the Angry Beaver Bar and Grill in Trenton have been charged with manslaughter in connection with a fatal head on collision in February. (CKWS TV)

In an unusual move, two bar owners have been charged with manslaughter in connection with a fatal head on collision near Trenton in February.

Police allege one of the drivers had been drinking at the Angry Beaver Bar and Grill for 16 hours before the crash.

Norm Boxall, who is a criminal defence lawyer in Ottawa, says this could be a precedent-setting case.

“They’re entering if not unchartered territory, territory that’s not been gone down too many times,” said Boxall, who is not involved in the case.

It is alleged 23-year-old Korin Howes left the bar in a car after drinking excessively on February 6. She was driving the wrong way on Highway 401 and slammed head on into the car driven by 23-year-old Shaina Harrison. Both women were pronounced dead on the scene.

David Stoll and Philip Sztejnmiler, the co-owners of the Angry Beaver, have each been charged with two counts of manslaughter.

The two men are also facing a number of Liquor Licence Act violations, including serving alcohol outside of operating hours, providing alcohol to someone who is intoxicated and giving it away for free.

Boxall said bar and restaurant owners will watch to see how this case plays out.

“This will send a ripple affect through persons in the hospitality industry and perhaps even homeowners for concern that if they serve persons to excess and those persons operate a vehicle that they wouldn’t just be responsible civilly and have insurance policies but they could be charged criminally and potentially go to jail.”

Smart Serve is a program designed to prevent the over-serving of alcohol.

“We always ensure that when they're asking us for a new beer watch their body language and make sure they're still functioning properly and that their words aren't slurred," said Carly Rogao, a bartender at the Clocktower Brew Pub in the ByWard Market.

The maximum sentence for a manslaughter conviction is life in prison.

Both men are scheduled to appear in court July 26.