OTTAWA -- A new report by Canada’s transportation watchdog says the LRT train car that derailed just outside Tunney's Pasture Station likely experienced problems several hours earlier, travelled the full length of the line at least once before the derailment, and was not inspected prior to the incident.

In a rail safety advisory letter released Monday, the Transportation Safety Board of Canada said an analysis of recorded information showed that the axle on one of the train's wheels likely failed at around 1:25 p.m. on Aug. 8 somewhere between Cyrville and Blair stations at the east end of the line.

"A review of event recorder and vehicle logs showed that (light rail vehicle) 1119 had experienced multiple wheel slip warnings during this time," the TSB said.

The train, which was coupled with vehicle 1115 travelled the full length of the line back to Tunney's Pasture. At 2:50 p.m., the train's operator reported a burning smell and the train was parked to investigate a sticking brake on vehicle 1115. Burn marks were found on the brake on that particular car and the brake calipers were released.

Since staff believed the issue had been identified, car 1119 was not inspected. The train was cleared to return to the maintenance facility and left at 8:30 p.m. The train then experienced a rough ride as it crossed the switch from the north track to the south track and it was found that two wheels on vehicle 1119, identified as numbers 3 and 4, had derailed.

"As the train was being re-railed, it was discovered that the No. 3 wheel was no longer attached to the axle," the TSB wrote. "The No. 3 wheel had severed from the axle due to a previously undetected catastrophic roller bearing failure and subsequent axle journal burn-off."

Roller bearings were later found several kilometres away on the track near uOttawa station.

"This suggests that, as the train travelled westward between 1:25 p.m. and 2:50 p.m., a cartridge assembly failed and some rollers were expelled," the TSB reported. 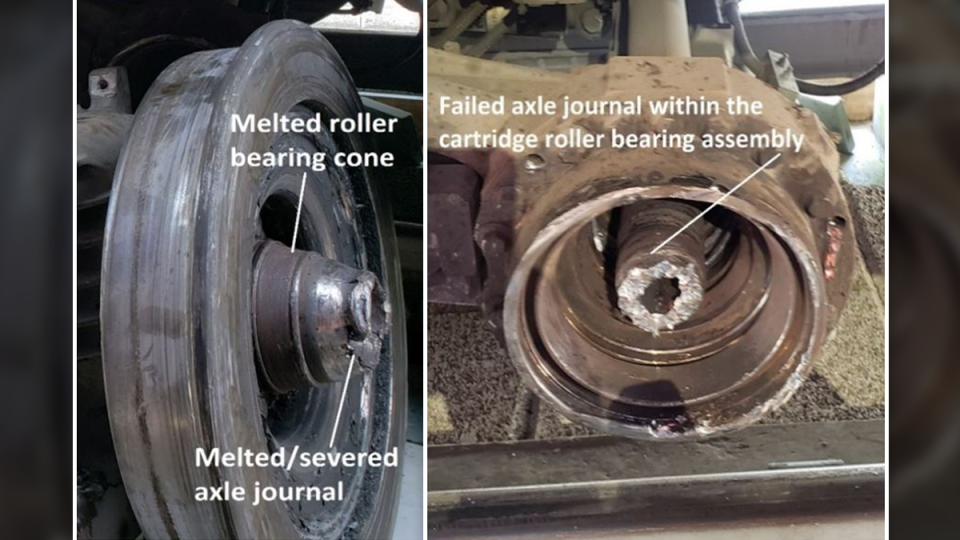 No passengers were on board the train that derailed on Aug. 8.

Axle bearing assemblies were earlier identified as the issue that caused the Aug. 8 derailment, and nine additional cars underwent maintenance to tighten the bolts on the axle bearing assemblies. Service on the entire Confederation Line was shut down for five straight days following the incident. A new periodic inspection regime was implemented requiring vehicles be elevated in order to inspect the cartridge assemblies from beneath the bogies every 7,500 km.

The derailment came just six weeks before a second derailment west of Tremblay Station, the cause of which has yet to be determined. The TSB said it appears the train involved in the Sept. 19 derailment had derailed before entering the station and continued for several hundred meters with 12 passengers on board until the train hit a signal box and came to a stop beyond the bridge over Riverside Drive. Service on the LRT remains fully suspended because of the Sept. 19 derailment.

The TSB wrote that the risk prevention strategy for the Confederation Line has proven to be insufficient.

"A Consolidated Safety File for the OLRT–Ottawa LRV project was created to document potential hazards, mitigating strategies, and safety-related activities for the LRV project. The document identified the potential for a 'locked axle' as a hazard at least twice," the TSB said. "The mitigation strategy to address this known hazard was regular maintenance that included visual inspections for grease leakage every 25 000 km. However, a locked axle can occur for a number of reasons, and there was no specific reference to a catastrophic roller bearing failure leading to axle journal burn-off."

However, the TSB said the vehicle that derailed would have been subjected to at least five inspections as outlined under this strategy and the derailment still occurred.

The TSB also said a heat detection system was considered during the design phase of the Alston Citadis Spirt train cars for the Ottawa LRT, but it was not considered a requirement because regular maintenance was believed to be sufficient. The TSB now says that has proven not to be the case.

"Now that a catastrophic roller bearing failure has actually occurred within a cartridge assembly and resulted in a derailment, the preventive risk mitigation strategy that relied on regular maintenance and visual inspections has proven to be insufficient to protect against such bearing failures," the agency said.

It is now asking city officials and representatives from Rideau Transit Maintenance and Alstom to address the issue.

The City of Ottawa said it is reviewing the letter and will inform the transit commission of its review when it is done.

"Earlier today, the City received a Rail Safety Advisory Letter from the Transportation Safety Board in relation to the August 8 derailment. We are currently reviewing the letter and will provide Mayor, Members of Council and the Transit Commission with an update once our review has been completed," said chief safety officer Brandon Richards in a statement.

Ottawa Coun. Diane Deans says she believes the LRT should remain offline until a heat detection system is installed.

"This is a major safety issue and the TSB made it clear that regular maintenance alone is not sufficient to detect these types of problems," Deans said in an interview with CTV News Ottawa.

"In my mind we should not be putting those trains back in service until those heat detection systems are installed on all of our vehicles... Unfortunately for transit riders in this city the wait may have to be longer, but safety trumps everything and we can’t put a system that may be unsafe back on the rails."

Deans also said the letter brought to mind issues of transparency that have troubled the public, city councillors and members of the transit commission.

"The transit commission and council have the duty of oversight on this big project and right now they’re meeting so infrequently and they’ve delegated so much authority and the staff and RTG have taken upon them so much authority that this kind of information is not being debated in the public forum, it’s not being made known to the elected officials who have the duty of oversight, and we’re seeing the consequences of that," she said.

"It’s a major major safety issue for the community and we need people in leadership roles in this city that understand the duty of oversight and aren’t withholding information from decision makers."

The same day the letter was released, the City of Ottawa announced a senior transit official from Montreal will take over the top job at OC Transpo following the retirement of John Manconi.

Renée Amilcar, the executive director of bus services for the Société de Transports Montréal, will take over the city’s transit services effective Oct. 18.