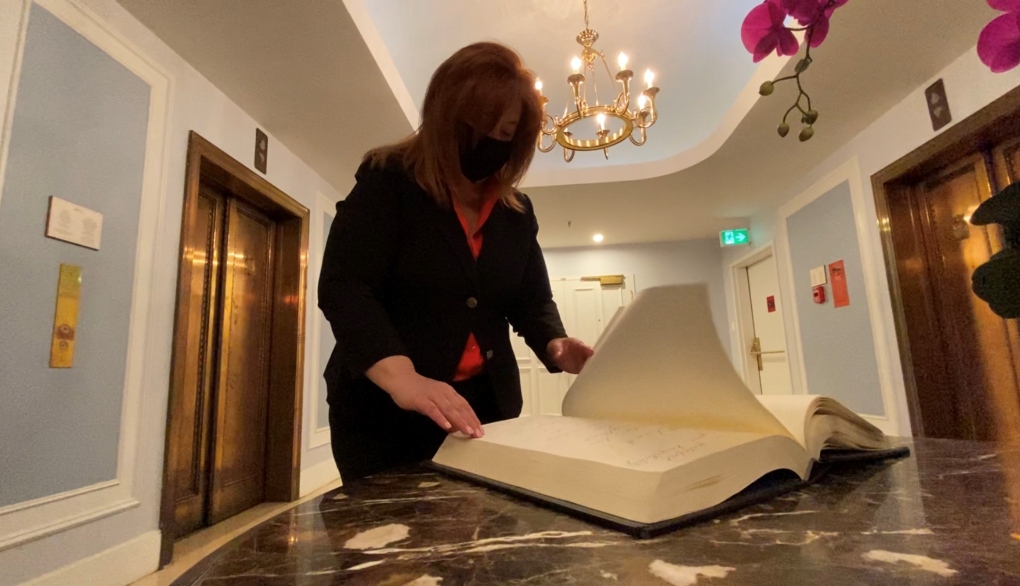 Deneen Perrin, marketing and media director with the Fairmont Chateau Laurier, flips through a guestbook, looking back at celebrities and world leaders she has met throughout her 25 year career. (Tyler Fleming/CTV News Ottawa)

For nearly a quarter of that time, Deneen Perrin has not only welcomed world-famous guests, she has promoted the hotel and has helped preserve the treasures within. As she moves toward a new career, Perrin looks back at a job she loves.

It is one of Canada’s landmark destinations, centred in the heart of Ottawa’s downtown core.  The Fairmont Chateau Laurier is where Perrin has worked for 25 years.

"You walk through its doors and you can just feel that grandeur," says Perrin. "And if the walls could talk. I’ll tell you there would be a lot of stories that they could tell."

While the walls cannot talk, the pictures that adorn them speak a thousand words. As Perrin, who started at the hotel with a four-month student-job placement, walks along the halls, she points out black and white moments of by-gone days frozen in time. Standing on the steps of the main entrance, Princess Elizabeth, the future Queen of the Commonwealth, next to her husband Prince Philip. Perrin points to her favourite photo, taken around the time the hotel opened in 1912, when horse and carriages brought guests to stay.

During her tenure, she has been a vital part of the development and promotion for the hotel. In 2002, for the 90th anniversary, she helped create the Heritage Gallery, which lies beyond the grand staircase, where photographs and historical documents line the walls between the shops.

In 2012, to mark the hotel’s 100th year, Perrin spearheaded events which happened nearly every month. Her most memorable, the amnesty program.

"It was so incredible! It was one of my favourite things," says Perrin. "That was a lot of fun so basically we asked no questions and you could return things that maybe somehow landed in your purse."

During her time, leaders from around the world have stayed. Perrin says she will never forget Nelson Mandela walking through the grand foyer. The Dalai Lama attended events at the Chateau as well.

Perrin was working when photographer Yousuf Karsh and his wife Estrellita moved out of room 358 after 18 years. Karsh originals, including his most reproduced photo of Winston Churchill, are displayed outside of Zoey’s restaurant.

And memories of famous guests past are marked in a large book Perrin had made. Signed by royalty, like Prince Albert II of Monaco and musicians Diana Ross, members of Pearl Jam, Chris Cornell. There are famous celebrities, like Joan Rivers, Alec Baldwin and the late Alex Trebek.

Perrin has ensured throughout her career that the legacy of the hotel will live on, and says it’s always been a team effort.

"I try and look at the castle as a place that can be discovered every day," says Perrin. "It is more than just a job you really do become one with this building but more importantly with the colleagues that have worked here so it’s really more than just a hotel, it's a family."

The hospitality industry is in a state of flux. The pandemic has changed the world and Perrin has decided it’s time to make way for the next generation of historical custodians who she hopes will learn from the history and bring new stories to the people of Canada.

"I’m headed to the Royal Canadian Mint. It’s going to be exciting. I say I’m going from one castle to the other castle," says Perrin. "I think the hardest part is to say goodbye to the people, a building is brought to life by the heart of the people who are in it and we have a lot of heart in this building."

Perrin says she won’t miss anyone, though, because her new job will be down the street and she plans visit. Whether it’s a cocktail on the patio or dinner in the restaurant, when she arrives, it will be her turn to be the VIP.