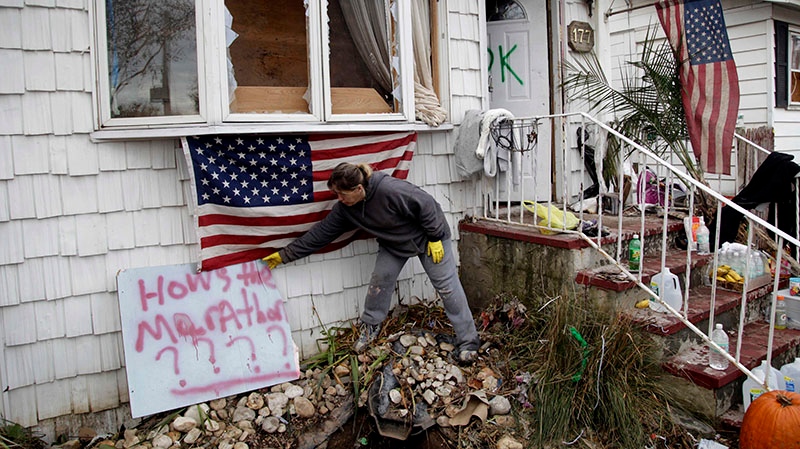 Sandra Finnegan places a sign against the marathon in front of her brother's house, which was destroyed by Storm Sandy, in Staten Island, New York, Friday, Nov. 2, 2012. (AP / Seth Wenig)

Ottawa residents already in New York City for its now-cancelled marathon say calling it off was the right thing to do.

New York City Mayor Michael Bloomberg had said he wanted Sunday’s race to go ahead after Hurricane Sandy because it would help with morale.

After days of backlash, including people who said the marathon would take resources away from cleanup efforts, the race was cancelled for the first time in its history.

The fact it happened less than 48 hours before the run meant many participants were already in the city, including some from our region.

“I’m not sure we quite understood the devastation that had happened, there are still a lot of people in their homes who don’t have electricity,” said Ottawa’s Lisanne Brosseau.

“It does sort of weigh heavily if you’re going to run around the city for a couple of hours.”

“But under the circumstances, the reasons that the mayor gave for cancelling it all make sense.”

Both runners who spoke to CTV Ottawa said they’ll stay in New York City for a few days to help with the cleanup, handing out food and water with many other runners.