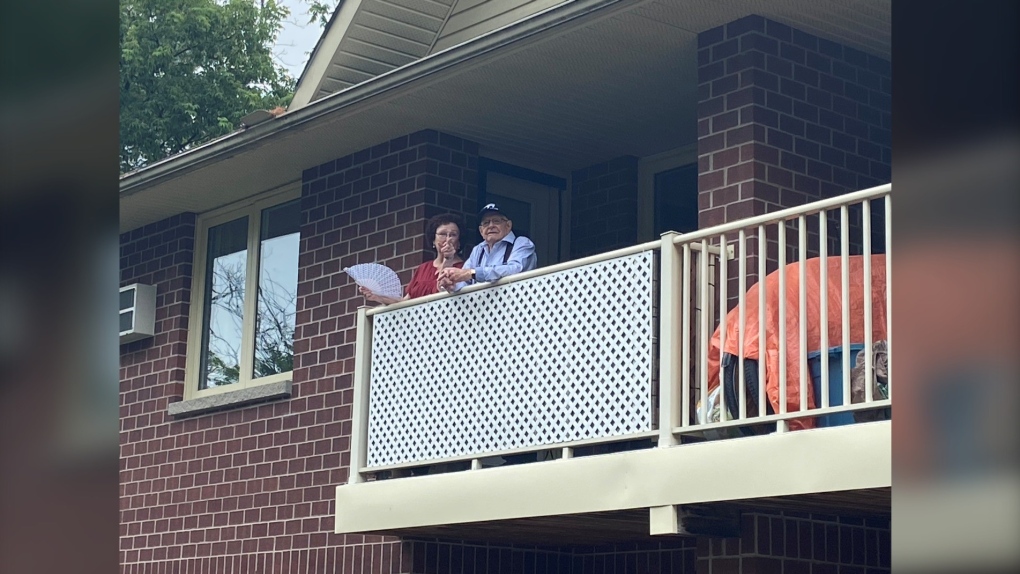 ARNPRIOR -- It is quite the weekend for Arnprior’s Eddie Levesque.

Saturday marked his five-year wedding anniversary with his wife Mary-Lou, and on Sunday Levesque celebrates 100 years around the sun.

A group of residents gathered below Levesque’s balcony Saturday morning to celebrate the milestone. The town of Arnprior even presenting Levesque with a certificate and Mayor Walter Stack calling in a favour from the fire department for someone he has known his entire life.

“My family and his family literally grew up next door to each other, with a paved driveway between the houses. For me it was like a second father situation. We just ran in and out of each other’s houses,” says Stack.

Two fire trucks made the trip to Levesque’s apartment; one current truck, and another from model from 1923 (still younger than Levesque) pulled from the town’s museum. Arnprior’s mayor went up on the fire truck’s crane to speak with his life-long friend, who has been in isolation during the entire COVID-19 pandemic.

Clemow attended the celebration with family friend Gwen Skuble, who says that despite his age, Levesque is still the life of the party, “Eddie’s 100 years old, but he’s in a 70 year old body”.

“He does the shuffle and he dances, and yeah, he does everything,” laughs Clemow.

Levesque is a World War II veteran and is known for giving his time to his community while asking for nothing in return.

“Eddie was a key organizer of the Santa Claus parade at the legion every day. Quite an artist in his day. He built and carved out the reindeer for the Santa parade, painted the sleigh and the set up for the parade in those days,” according to Mayor Stack.

Stack says the two shared a moment while he was up in the crane, face to face with his old friend. Stack says he handed him a note filled with memories, “He was getting kind of choked up so it was a really great day I think for him."