A landslide in West Quebec has forced the closure of part of highway 105 in Chelsea. The landslide happened near Patrick Street around 4 p.m. yesterday.  Today, geologists and engineers were at the site, trying to figure out how to stop any more of the land from eroding. The area affected got bigger over the course of the day as the sun warmed up the earth. So, too, did the problems for residents who live in the vicinity as they maneuvered around the closed highway.  Some of the residents had warned about this landslide for years. Suzanne Prud'homme's house rests right beside it.

"Yesterday when we came home,” says Prud’homme, “we saw all the trucks and that's when we knew.”

Prud'homme says she's been warning Transport Quebec about problems there for two years, after the ground under her shed disappeared. They eventually had to demolish the shed.

"We told them before if they didn't do anything it would affect the road so finally they're doing something,” she says, “now it's an emergency.”

Prud'homme says she finally got a letter last week from Transport Quebec saying they would fix the eroding area sometime this fall.

Now, the landslide has forced the closure of this section of Highway 105 for an undetermined amount of time, while geologists figure out how to stop the erosion before it hits the highway.  Chelsea's Mayor says the area is prone to landslides. The ground is comprised of clay.  In addition, there has been significant snowfall over the winter and now rainfall in the spring.

Caryl Green is the Mayor of Chelsea, “There was a slide here last year and the Ministry was in the process of having work done,” says Green.  “They had awarded a contract but certainly it's of a greater scope now.”

Highway 105 is a main artery through Chelsea.  Emergency vehicles will still be allowed access but residents now have a major detour to travel work and back home.  They just want to ensure their homes will be safe.

“I just want to know what's happened,” says Sandie Dessureault, who owns a property directly across from the landslide, “I think Transport Quebec doesn't know what has happened for now.”

Temperatures are expected to climb over the next couple of days and there is rain in the forecast for Thursday; a bad combination for the muddy mix that created that landslide. 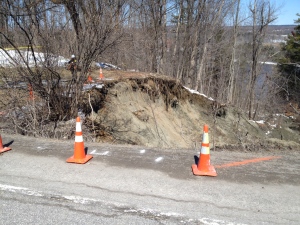 A landslide in West Quebec has forced the closure of part of highway 105 in Chelsea.