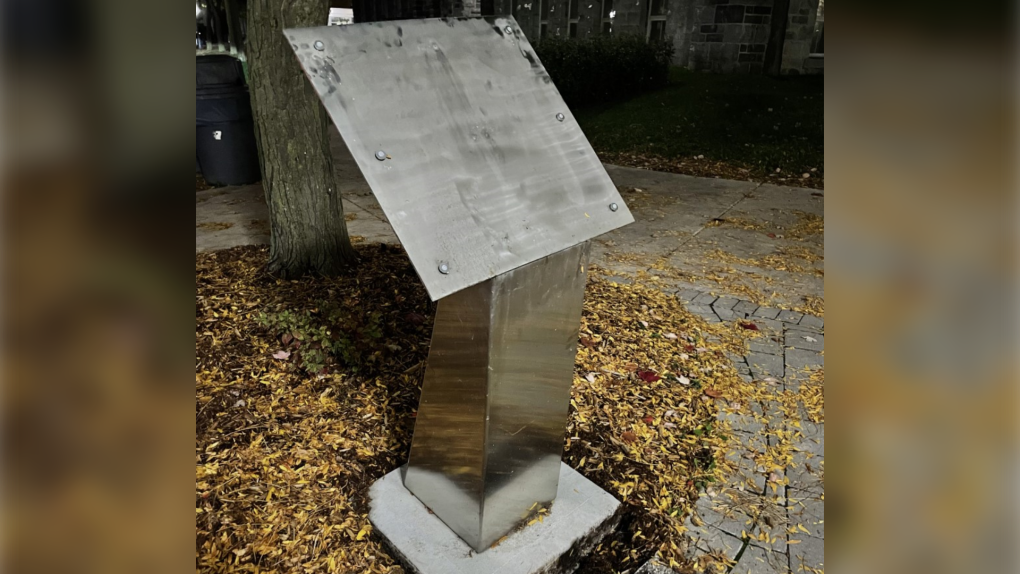 Kingston police are investigating after a commemorative plaque and metal booklet about a military company from Queen's University went missing the weekend of Oct. 16-17, 2021. (Submitted by Kingston Police Service)

KINGSTON, ONT. -- Kingston police are asking for the public's help locating a commemorative plaque dedicated to Queen's University students and staff who served in both world wars that went missing last weekend.

In a press release, police said campus security noticed the commemorative plaque and metal book was missing at around 2 a.m. Sunday, Oct. 17. Police believe the memorial was stolen.

"This monument holds significant meaning to Queen's University as it pays tribute to a group of Queen’s students and faculty who served during both World Wars," the police said.

According to Queen's University, the monument at the intersection of Union Street and Fifth Field Company Lane features an eight-page booklet containing information about the company, how it was formed, and their training.

Anyone with information in regards to this incident or who may have information pertaining to the identity of the male suspect is asked to please contact Constable Chris Gobeil at 613-549-4660 ext. 6190 or via email at cgobeil@kingstonpolice.ca