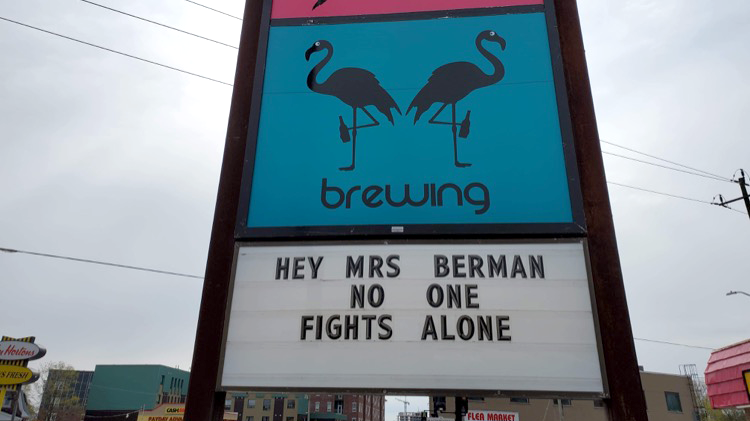 Reid and Ben from Kingston's MOVE 98.3 called on businesses to share messages of support for Angie Berman, who was visiting a hospital Friday morning for chemotherapy.

Berman is an education assistant at Our Lady Mount Carmel Catholic School in Kingston.

"Way before Christmas, I noticed a bit of change in my body. I ended up going for a mammogram, which I'm young for, it was definitely cancer," said Berman to Kingston's MOVE 98.3.

"I think the scariest part was I no longer have my hair, so I have a wig and I'm wearing some hats."

Reid and Ben: We spoke with the courageous Angie Berman, an EA at @ALCDSB_OLMC who’s battling breast cancer.

She has chemo today, so we arranged a little surprise for her — a little #ygksignwars ceasefire — that hopefully brightens her day. Here’s the story... ❤️ #ygk #cancer pic.twitter.com/t9Cb4xKlIr

Berman told Kingston's MOVE 98.3 a staff member at Our Lady Mount Carmel Catholic School came up with an idea for t-shirts, with the slogan "Hey Mrs. Berman, no one fights alone" to show support for Berman.

"It's perfect. When I'm at the hospital, I'll get pictures sent to me and it's like I'm not at the hospital because I have so much love from everybody at the school."

After hearing the story, Ben and Reid wanted to do something to let Berman know the community is behind her in her fight against breast cancer.

On Friday, several businesses changed their signs to say, "Hey Mrs. Berman, no one fights alone."

Earlier this week, several businesses began taking part in Sign Wars, part of a growing trend across the province. A Sign War is where people post signs, or use their business billboards to send call outs to other businesses in the city and poke fun at one another during the lockdown.