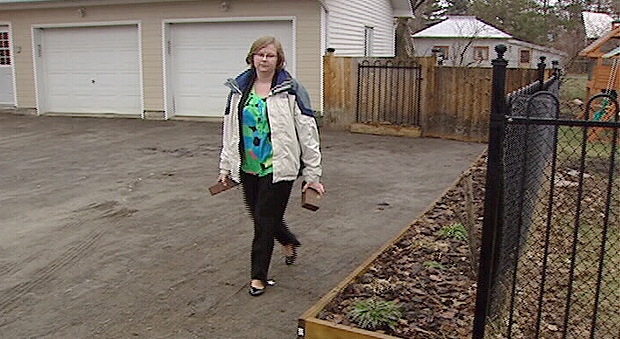 A Kemptville, Ontario couple is warning residents about a door to door paving company that ripped up their driveway last week without their consent. Now the homeowners are left forking out thousands of dollars to repair a job they didn't even ask for.

Homeowner Kathy Dickenson says she knew better than to hire someone going door to door.  She says when a couple of men with strong Irish accents offered a free estimate last week on repaving her driveway, she agreed but only to an estimate.

"Two days later my husband came home from work around 3 p.m.,” says Dickenson, “to find this individual and who he told me was his son ripping out our interlock and levelling the driveway.”  Her husband asked them what they were doing.  The man indicated that he had a contract with his wife to repave. Dickenson says there is no way any part of their previous conversation could have been construed as approval to proceed with the job. They called police.

“The police declined to file charges saying that if it was a simple mistake,” says Dickenson.

The owner of the company, Stone Road Paving, Paddy O'Reily, told police he had the wrong driveway when he started ripping up the Dickenson’s property.   The house O’Reily claims he was to do is blocks away from the Dickenson home. CTV Ottawa spoke with the owner of that property who told us she had a verbal contract with this same company to get her driveway repaved.  She signed nothing and was surprised to come home a few days later to find the job done.  Now she's concerned about the quality of the job but says O'Reily hasn't yet tried to collect his $2500 payment.  CTV Ottawa tried to reach O’Reily with the phone number provided on his business card. After several attempts, a man named Michael O’Neill answered and said O’Reily wasn’t there, to try later.  CTV asked about the address on Stone Road Paving’s business card, listed at 971 Moodie Drive.  There is nothing there but swampland and geese.

“Why is his office just a swampland,” asked CTV’s Joanne Schnurr of Michael O’Neill.

"I don't know,” says O’Neill, “I wasn't there ma'am.” Further attempts to reach O’Reily were unsuccessful. O’Reily’s business card is replete with spelling mistakes, including the words “asphalt”, spelled “asphalth”, “concrete” spelled as “concreate”.  Even Ottawa is misspelled as “Ottowa.”

"We have three other names for these companies that these gentlemen operate with the same MO,” says Diane Iadeluca.  “Best Paving, Master Paving Asphalt and Road Stone Asphalt.

Iadeluca says they have had more than a dozen complaints from consumers who paid thousands of dollars, usually in cash, for shoddy paving work.

“I've seen up to $8000 or $8500 that consumers have pretty well lost money because job not done properly and asphalt disintegrates so they have to redo the work.”

She says the complaints stopped in 2010.

That's about the same time that similar complaints started popping up in Edmonton and Vancouver.  The business cards look similar and involve two gentlemen with heavy Irish accents.

“This is just a complete nightmare,” says Dickenson.

She says the Ministry of Consumer Protection won't investigate since she didn't actually buy anything.

Her local MPP, Steve Clark has contacted the Minister’s office to ask her to fill the gap in the law that is exposing people like the Dickensons to damages. “This sends the wrong message to the community,” Clark said in a phone interview, “and we need to stand up for Ms. Dickenson. The OPP now tell CTV News that new information has come to light that they are reviewing to see whether criminal charges can be laid.  And late this afternoon, Dickenson’s insurance company agreed to cover them for damages to their property.