Kanata forest to be levelled within weeks 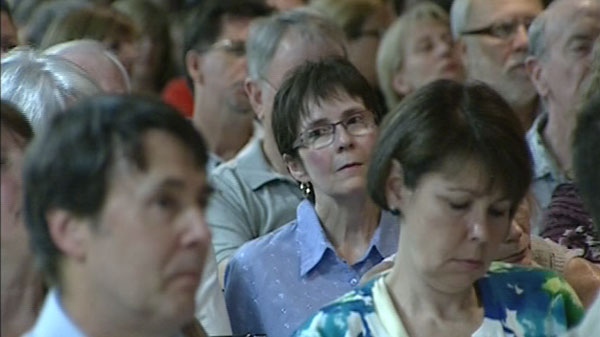 Residents gather in Kanata to try to save a forest in South March Highlands designated for for houses.

An Ottawa developer intends to start clear-cutting a forest in South March Highlands in Kanata within weeks.

KNL Developments, a partnership between development firms Richcraft and Urbandale, was scheduled to start bulldozing the old growth forest north of Beaver Pond on Monday to make room for 3,200 new houses.

The company has put that on hold until it can address a list of conditions from the city. However, it plans to remove the trees by the end of the summer.

"We recognize that the city is in a difficult situation and we want to work with staff and with the community to move this forward. But we do intend to clear the trees within the area designated for development this year -- this summer," said Mary Jarvis, of Urbandale.

At least 200 residents attended a public meeting in Kanata Thursday night in an effort to save the forest.

"We're not opposed to housing, we're opposed to an old growth forest being torn down," said Kanata resident Jennifer Bygrave.

The land has been designated for development since the 1980s. The company has promised to preserve 40 per cent of it.

With a report from CTV Ottawa's Stefan Keyes