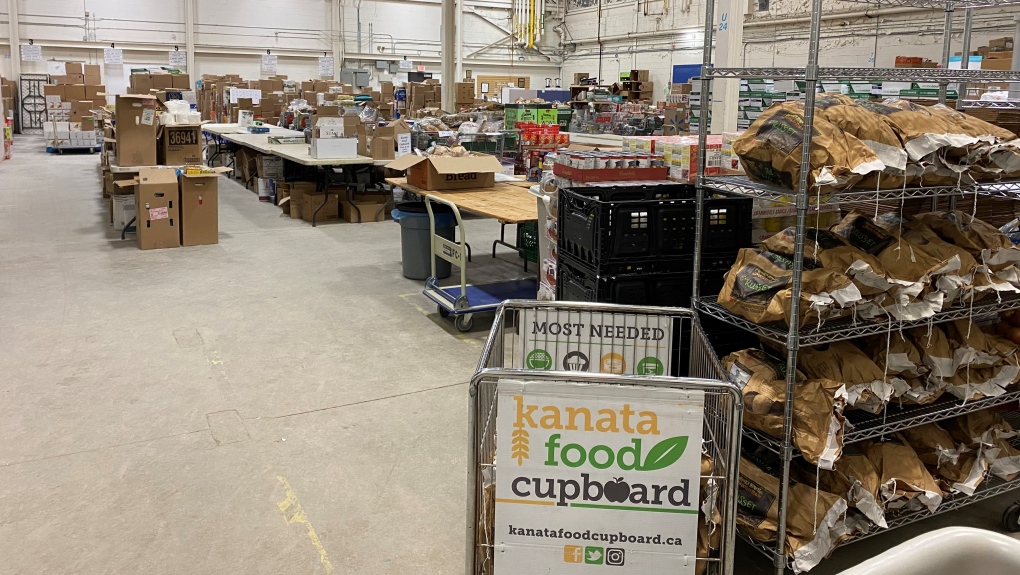 The Kanata Food Cupboard is reporting a steep increase in the number of families reaching out for assistance through the first two weeks of January, as food prices and household costs continue to increase.

"We do serve a rather high volume of families that are new to Canada or find themselves in transitional housing."

A poll from the Angus Reid Institute, released on Friday, showed that 57 per cent of Canadians reported having a difficult time feeding their family recently, up from 36 per cent in 2019.

Statistics Canada reported on Wednesday that Canada's inflation rate in December was the highest since 1991, at 4.8 per cent. Items that saw large year-over-year increases in prices between December 2020 and December 2021 included gasoline, sugar, bacon, white sugar and cooking oil.

Lalonde says client numbers are increasing, and the percentage of new families reaching out to the Kanata Food Cupboard for help each month is "startlingly increasing" as costs for food, gasoline and household essentials increase.

"They're doing the same as you; they're going to grocery stores, they're looking for the items that are on sale or that they can price match and, unfortunately, that's just not available for them," said Lalonde during an interview with Newstalk 580 CFRA's Ottawa Now with Kristy Cameron on Friday.

"And if they can afford their food, the cost of everything else in their household is going up as well so there's not a leeway for them to really make ends meat."

Lalonde says families also report a lack of winter jackets and boots, as temperatures dip into the -20C range this month.

"The number of families reaching out for assistance with winter basics this year has been astronomical," said Lalonde.

The Kanata Food Cupboard is open for client pickups and deliveries five days a week.

A former police officer, the 86-year-old mother of Buffalo's former fire commissioner, and a grandmother who fed the needy for decades were among those killed in a racist attack by a gunman on Saturday in a Buffalo grocery store. Three people were also wounded.

A driver who struck and killed a woman and her three young daughters nearly two years ago 'gambled with other people's lives' when he took the wheel, an Ontario judge said Monday in sentencing him to 17 years behind bars.

One of Canada's most successful Second World War flying aces, James "Stocky" Edwards of Comox, B.C., has died at the age of 100.

A major infant formula recall by the U.S. manufacturer of Similac has exacerbated ongoing pandemic-related supply issues for some Canadian retailers, according to the Retail Council of Canada, while other stores have generally been able to keep shelves stocked, with any shortages mostly temporary.