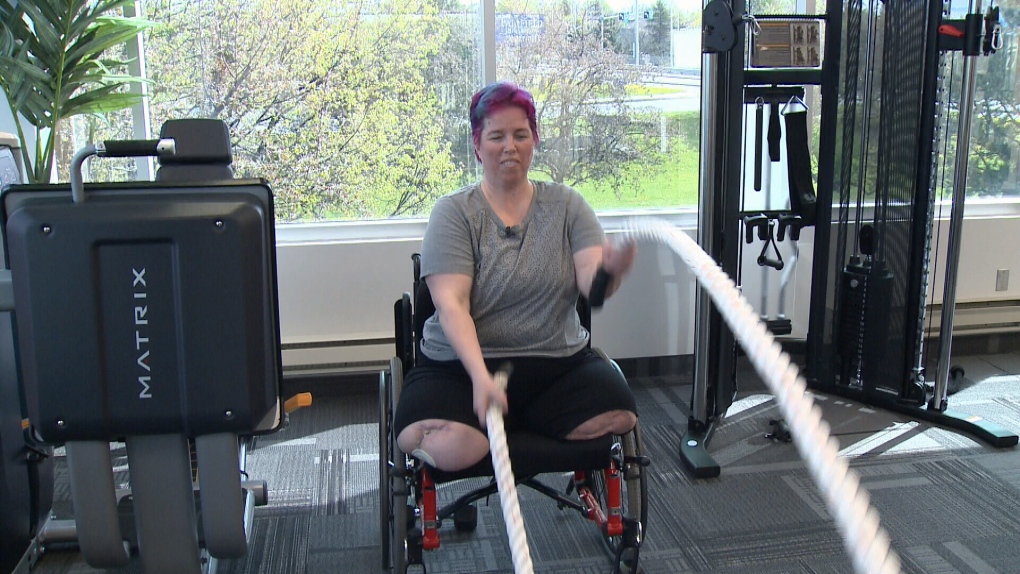 Marcie Stevens is a double-amputee. The wife and mother, a federal public servant, lost both legs in the OC Transpo double-decker bus crash at Westboro Station on January 11th. Since that life altering cold January day, Marcie has spent every moment working on her recovery.

Sporting her vibrant purple, pink and blue hair, Marcie Stevens’ coloured locks are just as cheerful as her personality.

“I’ve been told that I’m not like any normal patient,” Marcie says with a smile.

Those are all things most of us take for granted.  Not Marcie.

Marcie is a double-amputee.  The wife and mother, a federal public servant, lost both legs in the OC Transpo double-decker bus crash at Westboro Station on January 11th. The crash killed three passengers and injured another 23 passengers, including Marcie.

“I try not to think about it daily,” Marcie tells CTV, “I try to live in the moment.”

That hasn’t been easy. Now Marcie, through her Toronto-based Howie, Sacks & Henry Personal Injury lawyer Meghan Hull, has launched a $19 million dollar lawsuit.  The statement of claim, issued May 21, names the City of Ottawa, OC Transpo and the double-decker bus driver Aissatou Diallo as defendants.

“On January 11, 2019 Marcelle (Marcie) was a passenger on the second level of the bus,” says the statement of claim, “suddenly and without warning, it violently collided with the bus shelter.  As a result of the collision, Marcelle sustained severe, permanent and catastrophic injuries.”

Marcie is asking for $15 million in damages, $2 million in punitive and aggravated damages and another $2 million for her husband Christopher and their two sons.

Since that life altering cold January day, Marcie has spent every moment working on her recovery.  She spent more than a month in the trauma unit at the Ottawa Hospital healing from the multiple surgeries and medical procedures after the amputations.   She was then moved to the hospital’s Rehabilitation Centre where she learned the important tools she needs to build strength and move independently.

Incredibly, and to the amazement of doctors, Marcie was released from the Centre in April, given the go-ahead to return home and live with her family.

“I love being home; it’s just that, everything was taken from me.”

At home, with every day that goes by Marcie is faced with the new challenges associated with living in her old life.

“I don’t want to say kind of like a prison cell but I’m kind of stuck here.  I can’t go out by myself.  I don’t have my driver’s license yet.  I’m stuck in this house.”

She has trouble getting around her two-storey home, one that was not built for someone in a wheelchair.

The first problem she says is the main floor bathroom,

“It’s not very private because I can’t close the door with the wheelchair in the way.”

Marcie then gives us a tour of her main floor, highlighting the obstacles she faces.  Small passage ways and tight turns make it difficult to cook, clean and live.

“Everything that I took for granted when I had legs that were easy to do, are no longer easy to do here.”

Just days before our visit, the house was equipped with a lift that now allows Marcie to go to the second level of the home.  She says it allows her to tuck her kids into bed and sleep alongside her husband for the first time since the day of the crash.

Still she says the couple is in the process of looking for a new home which she admits is a difficult reality for her children who have grown-up and made friends in the quiet neighbourhood.

“I love this house, but this house is not for me anymore.”

Most of Marcie’s days are highly scheduled with who she calls her “dream team” to get her to her next goal of being able to walk again.  She meets with dieticians, occupational therapists, psychologists, and personal trainers.  Doctors have recommended she lose 40 pounds before she can be fit with prosthetics.  Marcie is determined.

“The goal is to get stronger, lose the weight, get the legs and hopefully walk on my own.”

She plans to one day return to work and get back on the bus,

“I will get back on the bus for only one bus ride, just to prove to myself that I can do it.”

During her time at the rehab centre Marcie says she had a chance to meet with some of the other bus crash victims, and form friendships.

The bus driver, Aissatou Diallo has not been charged in connection with the crash.  None of the allegations in Marcie’s claim have been proven in court. Ottawa Police say the investigation continues.

“I think once we know the investigation is over and we know what happened then that will kind of bring some closure to everyone,” Marcie says.

“I don’t know who’s to blame and right now I’m not focusing on that.  I’m really focusing on trying to get my life and my independence back.”

Marcie sits back with that look of determination she wears so well,

“And just you watch,” she says with that smile,