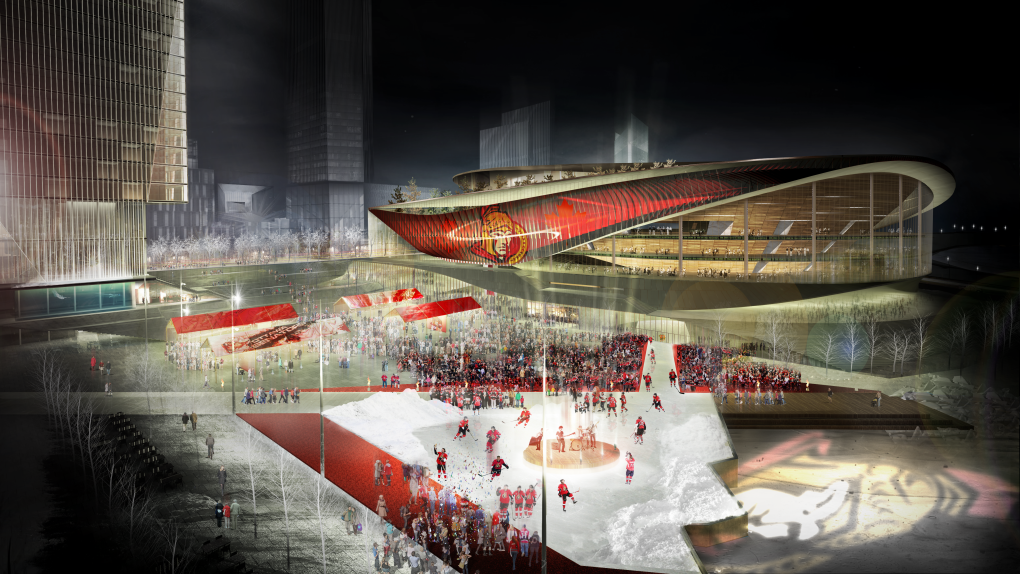 A judge has ordered a company owned by late Senators owner Eugene Melnyk to turn over documents in a legal fight with Trinity Development Group about an ill-fated bid to redevelop LeBreton Flats.

The decision earlier this month appears to show proceedings in the years-long legal dispute are moving forward despite Melnyk’s death in March.

Melnyk’s company Capital Sports Management Inc. had been withholding the documents citing solicitor-client privilege with Gowlings, the law firm that worked on the bid. The judge’s decision compels them to produce those documents.

“CSMI shall produce all correspondence, memos, accounts, emails, data, and other documents in its possession, control of power related to the work of Gowlings for RLG and the LeBreton Project from July 23, 2015 to November 23, 2018,” the decision from Justice Robyn M. Ryan Bell said.

Melnyk and CSMI partnered with John Ruddy and Trinity Development Group in RendezVous LeBreton, the bid to redevelop the 50-acre parcel of land just west of downtown Ottawa. The plan, which would have included an NHL arena, fell apart in 2018 over a dispute about Trinity’s nearby development at 900 Albert Street.

Melnyk, through CSMI, sued Trinity for $700 million, claiming the development would reduce the value of the real estate at LeBreton Flats. Trinity Development Group counter-sued for $1 billion, and the two sides have been mired in legal fighting since then.

The start of the trial was recently pushed back by three months to Jan. 3, 2023. It had been scheduled to start in September.

This latest decision centres around documents that CSMI had been withholding citing solicitor-client privilege.

At issue is whether Gowlings, the law firm that worked on the RendezVous LeBreton bid, was working for both CSMI and Trinity.

CSMI claimed there was no joint retainer, and that Gowling was in a solicitor-client relationship with CSMI alone. Trinity’s position is the law firm was jointly retained until litigation between the two sides started.

Bell heard arguments on the matter in January, and earlier this month issued a ruling agreeing with Trinity’s position, compelling CSMI to turn over the documents.

The court has allocated four months for the trial.

Melnyk died in late March at age 62 after a lengthy illness. His death threw the future of the Senators into uncertainty. His estate owns the team and it is being run by an oversight board. Earlier this month, NHL commissioner Gary Bettman said earlier this month the team is not for sale.

LeBreton Flats, meanwhile, is going through another redevelopment phase. The National Capital Commission received several expressions of interest for a major attraction on the site earlier this year.

It’s believed the Senators submitted a bid to put an arena on that land, but the NCC has not released details about the list. More details are expected at the board’s meeting in June.

No 'warnings or second chances' for illegal activity on Canada Day: Ottawa mayor

Ottawa's mayor is warning the city won't tolerate any illegal activity downtown during Canada Day festivities this year, as the city prepares for possible protests.

Canada handled key aspects of the COVID-19 response better in the first two years of the pandemic than most G10 countries, according to a new study by researchers from the University of Toronto, Unity Health Toronto and St. Michael's hospital.

South African authorities investigating 21 teenagers found dead at an east coast tavern over the weekend said on Monday the youths were probably killed by something they ate, drank or smoked, ruling out the earlier-touted possibility of a stampede.

Ukraine's richest man filed a lawsuit against Russia at Europe’s top human rights court on Monday, seeking compensation over what he has said are billions of dollars in business losses since Russia's invasion.

What's the impact of a Russian debt default?

Russia is poised to default on its foreign debt for the first time since the Bolshevik Revolution more than a century ago, further alienating the country from the global financial system following sanctions imposed over its war in Ukraine.