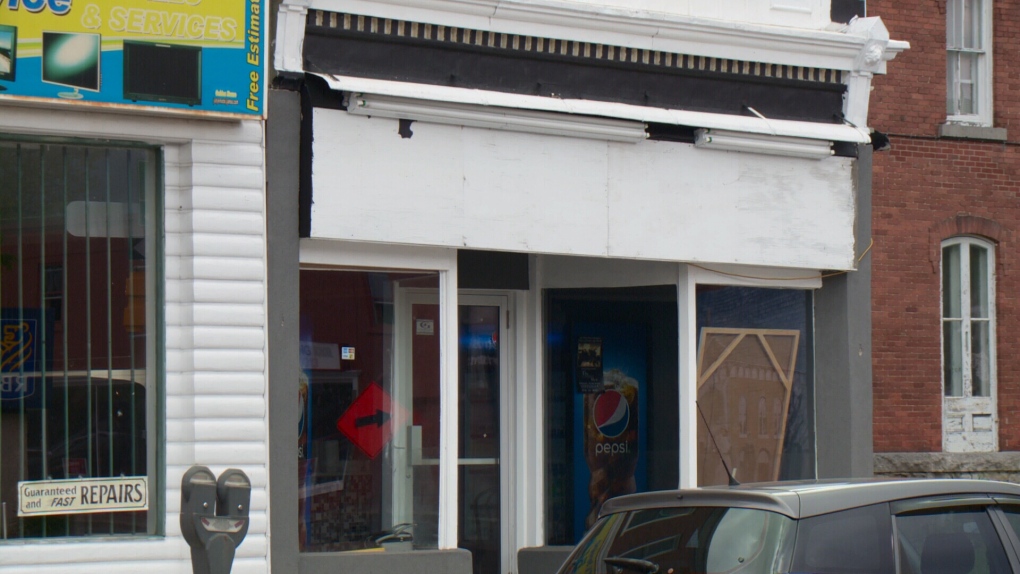 Eight people from Eastern Ontario and Quebec are in custody tonight after police busted a gun trafficking ring.  They believe the hub of that ring was run out of a Cornwall business right across the street from the police station. The sign is gone on the business on Cornwall’s Pitt Street. So is pretty much everything inside but up until recently, it was a business called Cedar on Wheels. That is, until it was busted yesterday by police.

‘A SWAT team went in and smashed the door down,’ says Brian Danaher, a construction worker who was it all happen.  He used to frequent the shawarma shop.

‘They seemed like good guys,’ he says of the owners, ‘it was a nice business. We don't know what was going on behind the scenes. We were surprised.'

Surprising, too, is the location: right across the street from the Cornwall police station.

Dan Aikman is Cornwall’s Police Chief, ‘I think I would characterize the location as bold,’ Chief Aikman told a news conference in Long Sault today, ‘but once the Project was underway, we were well aware of its location.’

Today, police from various agencies, including the OPP, RCMP, Ottawa, Cornwall, SQ and Akwesasne police forces, held a joint news conference to display the goods they seized in a five-month long investigation called Project Harden. Among the items seized were several prohibited handguns, a silencer, an AK-47 assault rifle, ammunition, about $100,000 worth of cocaine and $100,000 in cash.

‘The drug trade requires firearms,’ said Superintendent Paul Beesley with the OPP, ‘and we believe the firearms seized in this project were to facilitate drug trafficking.’

Police say the bulk of the illegal handguns came from United States.  The Cornwall region is a challenging area for the police with an international border that criminal can cross both by car and boat.

Of the 8 arrested yesterday, most of them are from the Cornwall area:

But one man, 27 year old Masaed Rashed is from Ottawa, a city that has seen a spike in shootings last year and two handgun related murders this year.

‘Yesterday, the arrest of Masaed Rashed, age 27 and the execution of warrant in Ottawa confirms the Ottawa conection for cocaine trafficking,’ McKenna said, ‘and the reality that some or all of the 9 handguns and 1 assault rifle, had they not been seized, may have been designed for Ottawa.’

Police believe they have made a dent in organized crime and hopefully prevented some shootings as a result.