'It just made everything worse': Mother takes Sun Life to court over revoked benefits 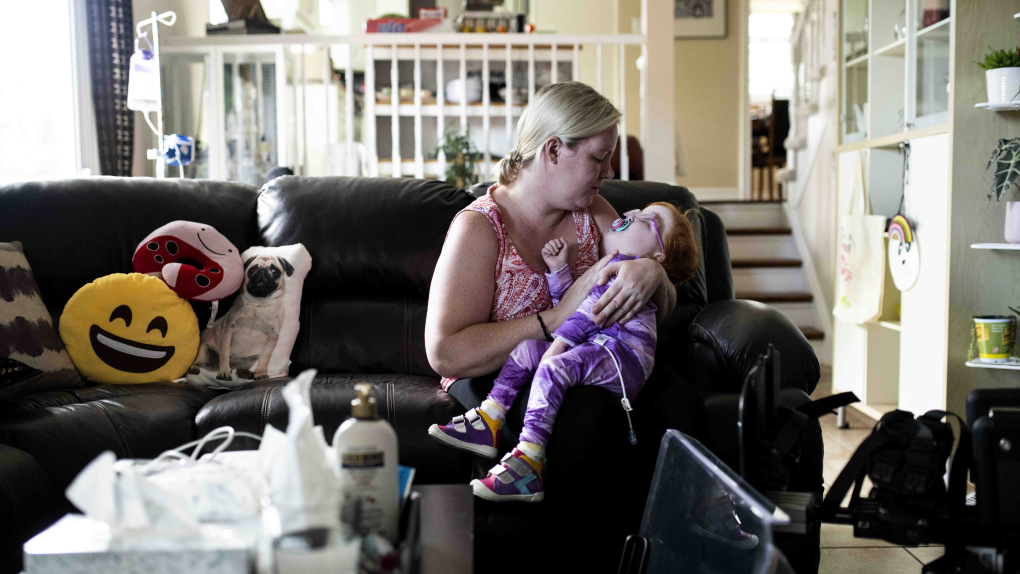 Amanda Jollymore rocks her daughter Mia, 2, who has an unknown genetic syndrome along with other diagnosed medical issues, as they sit on the couch at their home in Ottawa, on Monday, June 27, 2022. (Justin Tang /THE CANADIAN PRESS)

Amanda Jollymore slipped into a dark place towards the end of last year.

Neurologists said her two-year-old daughter, Mia, would never walk or talk. After numerous trips to the hospital and a barrage of tests, she learned the little girl needed palliative care.

Jollymore's depression deepened, her anxiety heightened. The Ottawa woman had been off work since May 2021 as she focused on her daughter and her own worsening mental health.

In late January, the next blow landed.

Sun Life, which had approved Jollymore for long-term disability in August 2021, pulled her coverage.

"It just made everything worse," Jollymore said through tears in a recent interview. "I feel like my body is five times heavier because I'm so depressed, but I have to keep going because of my kids."

Jollymore has now taken the insurance company to court. She filed a lawsuit in May claiming she's entitled to long-term disability due to her depression and general anxiety disorder -- diagnoses supported by her doctors -- that don't allow her to work.

The insurance company, for its part, denies Jollymore is entitled to long-term disability.

In its statement of defence, filed last month, Sun Life said Jollymore initially qualified for long-term disability in August 2021, when they approved her claim. Information sent by Jollymore at the time met the definition of being "totally disabled" as required in the policy, the statement of defence said.

But after a review of the medical reports on file and other information, Sun Life said Jollymore "no longer continued to meet the definition of 'total disability' or 'totally disabled' within the meaning of the policy" and terminated the benefits on Jan. 31, 2022, the statement of defence said.

The statement of defence does not specify what led to Jollymore no longer meeting the definition of being totally disabled and Sun Life didn't answer detailed questions about her case, citing privacy.

Jollymore and her lawyer, Albert Klein, said they do not know what led to her long-term disability coverage being revoked.

"Amanda has been paying into these premiums for years thinking she has a safety net, some peace of mind, then Sun Life arbitrarily decided on a whim's notice that they're not going to cover her," Klein said.

Jollymore's daughter was born on March 4, 2020. Doctors noticed physical symptoms that suggested congenital defects and referred her to the Children's Hospital of Eastern Ontario in Ottawa, thus beginning her health-care odyssey.

Doctors examined every part of Mia's little body. They looked at her brain, examined her blood and genetics and took bone biopsies. Some thought she could have dwarfism, others thought it was a bone marrow problem.

"It was an exhausting first few months," Jollymore said.

At nine months old, Mia had infantile spasms and was diagnosed with a rare form of epilepsy. She contracted urinary tract infections, other times she'd catch a cold and her oxygen levels plummeted.

Mia was admitted to hospital 13 times in her first 18 months, Jollymore's claim states. Doctors diagnosed the little girl with a hole in her heart, severe far-sightedness, low white blood cell count, global developmental delay, brain damage that affected her vision, frequent bouts of pneumonia and lung disease, among other issues. She feeds through a tube in her stomach and burps through a syringe.

"She has the developmental level of a two-month old baby," Jollymore said.

"Every time she gets admitted, it's realistic she might not be coming home," Jollymore said as she cried.

"Obviously this made my mental health very, very bad."

Jollymore returned to her job as a workforce analyst in March 2021 once her maternity leave ended. She worked remotely from her daughter's bedside every day. She and her husband also have a 12-year-old son who needed love and attention.

"I wasn't able to focus because I was constantly crying, I was late for meetings or calls," Jollymore said. "I was making mistakes."

She said she was exhausted, but couldn't sleep, lived with a steady stream of headaches and had angry outbursts.

"That was amazing," Jollymore said. "I could focus on my mental health."

In January, a case worker told her a review found nothing to support her claim that she was incapable of working. Her appeal to Sun Lifewas declined.

"The decision actually made my mental health much worse," Jollymore said.

Her husband works long hours in the restaurant industry to try to support the family while she cares for Mia. They also took out a line of credit to pay the bills.

Jollymore said she does try to focus on the positives when she can.

They celebrate Mia's "inchstones" -- their version of milestones -- like a recent one where she can hold her head up for three seconds.

Mia's bright green eyes light up when she hears her dad's voice and she "absolutely adores her brother."

"We call her our warrior," Jollymore said.

The overwhelming sadness that tinges every day, however, is hard to get past.

"I spend my days snuggling her and taking it all in because I don't know how much time we have," Jollymore said. "I'm not good."

This report by The Canadian Press was first published July 7, 2022.