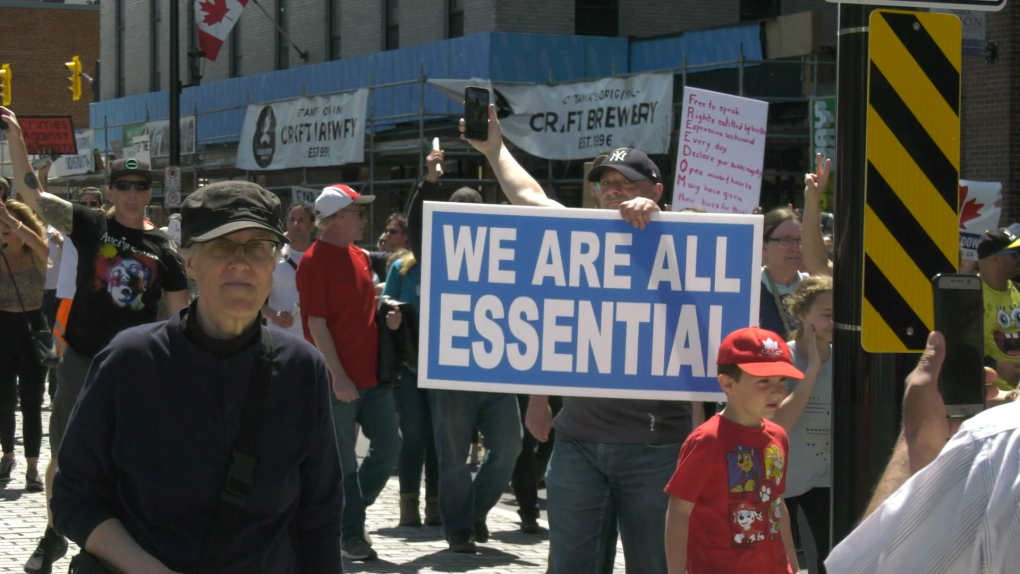 OTTAWA -- Ottawa Mayor Jim Watson is expressing frustration with the anti-lockdown rally in downtown Ottawa this weekend, saying it was irresponsible for organizers to hold a demonstration during the stay-at-home order.

Ottawa police estimated 500 people took part in an anti-lockdown march through Centretown and the ByWard Market on Saturday.

Participants, many maskless, held signs saying, "flatten the fear," "we are all essential" and "freedom over fear." They also chanted, "no more lockdowns."

During an interview on CTV News at Six, anchor Stefan Keyes asked Watson what goes through his mind when he hears about anti-lockdown protests during the stay-at-home order.

"I’m glad quite frankly it was 500 people in a city of a million, that’s a pretty small turnout and I think it’s symbolic of the fact that the vast majority of people are sensible, thoughtful citizens of our city that understand that we are in a pandemic that over 500 people have lost their lives in this city alone."

There have been several demonstrations in Ottawa to protest the COVID-19 restrictions during the pandemic but Saturday's appeared to be the largest in Ottawa so far.

"To go out and you see the pictures of people not wearing masks and not properly distancing and unfortunately some of those people, undoubtedly, will contract COVID-19. It really is irresponsible on the part of some organizers who have ideological challenges with accepting medical advice," said Watson.

"I think it’s frustrating for the medical professions who are working all out, nurses, personal support workers working to the bone and they see this kind of stupidity on the streets of Ottawa. It’s not helpful at all."

All indoor and outdoor social and public gatherings are prohibited during the Ontario stay-at-home order.

CTV News Ottawa reached out to Ottawa Bylaw and Regulatory Services on Saturday to see if the organizers of the rally would be investigated for possible violations of the Provincial Orders. A city spokesperson suggests reaching out to Ottawa Police.

An Ottawa police spokesperson told CTV News Ottawa Saturday they were unaware of any investigation into the gathering.