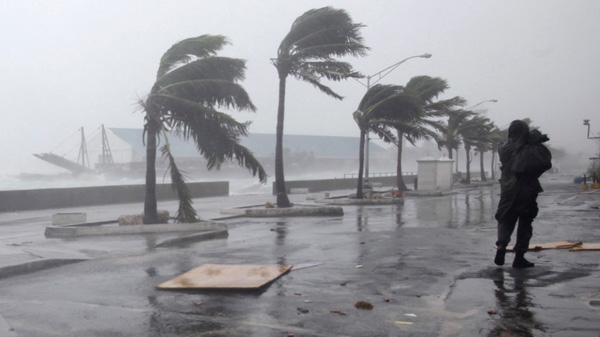 A man walks along the waterfront as Hurricane Irene passes to the east of Nassau on New Providence Island in the Bahamas, Thursday Aug. 25, 2011. (AP / Lynne Sladky)

HALIFAX - The wrath of hurricane Irene will be felt across a wide swath of Eastern Canada as the sprawling storm is expected to lash parts of the region with hurricane-force gusts and torrential rain late Sunday and into Monday, forecasters say.

The Canadian Hurricane Centre in Halifax says Irene - the first hurricane of the season - will likely transform into a ragged tropical storm as it churns its way across northern New Brunswick and into eastern Quebec and Labrador.

That means Irene's strength is expected to diminish as it moves northward, but the program director at the hurricane centre, Chris Fogarty, says Irene will still pack a mean punch.

"It's large now, but it's going to get a lot larger," he said Friday after a briefing at the centre.

"The highest winds are going to spread much further from the eye. We really have to stress that the track line itself is not the worst part of the storm, especially when it gets up to Eastern Canada."

"You can expect a heavy burst of rain through the day on Sunday, followed by wind overnight and into Monday," the meteorologist said.

"With the storm tracking like this ... the potential for hurricane-force wind gusts is definitely there. ... Right now, right of the storm track is where people need to be concerned."

If Irene stays on course, the right side will include southern New Brunswick, eastern Quebec, the Bay of Fundy and much of P.E.I. and mainland Nova Scotia.

The centre issued a statement Friday saying sustained storm-force winds at 60 kilometres per hour will spread over much of the Maritimes and eastern Quebec, but there will be stronger gusts in some areas.

Fogarty said the timing of the storm couldn't be worse for residents along the Bay of Fundy. The problem is that the moon is particularly close to the earth and it will be moving into a new phase by midday Monday, the combination of which will lift the tides to unusually high levels.

Storm surges could cause flooding around the bay, Fogarty said.

In early September 1954, hurricane Edna caused severe damage and flooding in southeast New Brunswick when she roared through Maine and into the Maritime provinces.

Edna made landfall as a Category 1 hurricane. Sustained winds reaching 160 kilometres per hour were reported in southern Nova Scotia. Environment Canada says one person died in Nova Scotia and many others were injured.

However, hurricane Gloria caused little damage in Canada when the storm took a similar route in late September 1985, prompting mass evacuations along the U.S. East Coast. Gloria made landfall in New Brunswick as a tropical storm with winds of 93 kilometres per hour, knocking out power in Fredericton and St. Stephen.

With Irene now drawing energy from the warm waters of the Gulf Stream, the storm could grow in strength in the days ahead, Fogarty said.

Nova Scotia's Emergency Management Office issued a statement reminding residents that the unpredictable track of the storm is only one factor to consider when preparing for rough weather.

"Please remember that hurricanes are very large storms and areas hundreds of kilometres outside of the track can be impacted," the office said.

"All Nova Scotians are asked to remain vigilant over the weekend and into next week. Monitor weather and hurricane forecasts. Restock 72-hour emergency kits. Review family emergency plans. Prepare your home."

Emergency kits should include adequate food and water, flashlights and batteries, crank- or solar-powered radio and copies of important documents, the agency said.

"When severe weather is imminent, outdoor items such as barbecues and lawn furniture should be tied down and vehicles should be fully fuelled."

In the Carolinas, swells and waves rising to three metres were reported along the Outer Banks and thousands had already lost power as the fringes of the storm began raking the shore.

Earlier this week, Irene destroyed hundreds of homes on small islands in the Bahamas, but largely spared the capital of Nassau.

At 700 kilometres across, Irene is a huge hurricane, and a high pressure system in the western Atlantic Ocean is pushing the storm farther west than usual.

As a result, some 65 million people along the densely populated U.S. East Coast were bracing for the worst as Irene is expected to bring high winds and heavy rain to the cities of Washington, Baltimore, Philadelphia, New York and Boston.