Interim police chief to 'Rolling Thunder' convoy: 'You will be held accountable'

Ottawa's interim police chief is telling the organizers and participants of the planned 'Rolling Thunder' event this weekend that they will be held accountable for their actions.

Speaking to the Ottawa Police Services Board Monday, Steve Bell told organizers and participants of the event that they are responsible for their own actions and the consequences of those actions.

"I want to be clear with both organizers and participants: you will be held accountable for your actions before, during, and after the events," Bell said.

About 500 to 1,000 motorcycles and other vehicles are expected to take part in the event starting on Friday. But unlike the ‘Freedom Convoy’ protest earlier this year, participants will have to attend on foot rather than driving downtown, as protesters won’t be allowed to drive into the downtown core.

“We have identified that based on what’s occurred in our city over the last number of months, that vehicle-based protests shouldn’t occur in that area,” Bell told Newstalk 580 CFRA’s Leslie Roberts on Monday.

Bell said police are establishing an exclusionary zone bordered by the Rideau Canal to the east, the Ottawa River to the north, Lyon Street to the west and Laurier Avenue to the south.

That strategy is a shift from the ‘Freedom Convoy’ protest, when hundreds of large trucks ended up occupying downtown streets for three weeks, leading to a massive police operation evicting them.

“Our communities are scarred by what happened in February. They were deeply hurt and deeply affected by that,” Bell said. “They expect us to maintain community safety and well-being in their areas, and we’re putting plans in place to make sure we do that.”

Police say residents should expect traffic delays. Some areas may be restricted to pedestrians only. Bell said residents can expect the police presence to increase Thursday into Friday, with road closures starting Friday into Saturday. 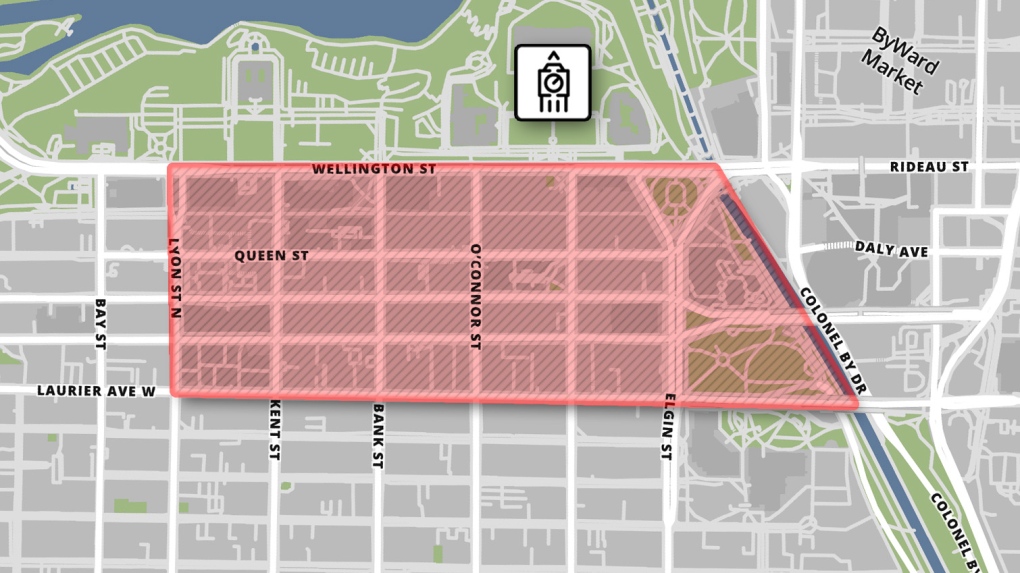 Ottawa police say protesters won't be allowed to drive into the downtown core as part of the 'Rolling Thunder Ottawa' demonstration this weekend. (CTV News Ottawa)

“Depending on how it unfolds, that should loosen up Sunday and move into regular operations next week,” he said.

He also said RCMP and OPP officers will be joining Ottawa Police officers downtown on the weekend.

The ‘Rolling Thunder’ convoy is scheduled to roll into town on Friday. The group’s website says a rally and march is scheduled for Parliament Hill at 6 p.m. on Friday.

The event schedule for Saturday includes a Veterans For Freedom service at the National War Memorial, a bike roll to downtown Ottawa and a rally and march on Parliament Hill.

There is no information on the “Rolling Thunder Ottawa” website about the group or the reasons for the event next weekend. The partners include Veterans for Freedom and Freedom Fighters Canada, which is demanding an end to all government COVID-19 mandates in Canada.

Police say they are aware of a site on Eagleson Road where some participants are gathering this weekend; that area will see an increased police presence and possible traffic delays.

“We’re a city and a police service that absolutely understands and protects peoples’ right to lawfully demonstrate. We will continue to do that,” he said. “People can attend the War Memorial. We encourage them to. It will just be on foot.”

Bell said police have been in contact with organizers and made it clear protesters are welcome to attend the downtown core on foot and protest lawfully. And he said police are identifying a route for the group to safely drive through the city.

“If people are driving through respectfully an area in their rally, to come follow our course and be out and back onto the Queensway to be gone, we’re absolutely going to facilitate that,” he said. “If they’re roaming around neighbourhoods, creating public safety concerns or issues, we are going to use our enforcement abilities.”

While Bell would not speak to operational plans, he said he was confidence the Ottawa Police Service has created a plan that identifies potential risks and puts resources behind it to respond to concerns and keep people safe.

Community groups say they oppose the “Rolling Thunder Ottawa” rally set for Ottawa and are calling on police to stop working with the organizers for the event.

Community Solidarity Ottawa claims that “Rolling Thunder Ottawa” is “not a bike rally in support of veterans.”

“It is a thinly disguised extension of February’s anti-democratic, month-long ‘Freedom Convoy’ occupation of Ottawa,” the group said in a statement this weekend.

“’Rolling Thunder' is a direct threat to our community, and the far-right politics it brings with it are a broader threat to our safety and democracy.”

The “Rolling Thunder Ottawa” event rolls into town just over two months after the end of the “Freedom Convoy” demonstration that occupied downtown streets for more than three weeks.

We're calling on @OttawaPolice to cease providing logistical support to far-right linked "Rolling Thunder" convoy coming to #Ottawa next weekend and for @ottawacity council to take leadership and condemn this action.

Many Canadians remain unaware of the involvement of forced child labour in the products they buy, according to non-profit agency World Vision Canada.

As Pride festivities kick off around the world, many refugees are celebrating the LGBTQ2S+ community for the first time.

Prime Minister Justin Trudeau headed to the G7 summit in Germany on Saturday without a consensus from the Commonwealth to condemn the Russian invasion of Ukraine, but with a chorus of countries calling for help to overcome the fallout of the war.

WHO panel: Monkeypox not a global emergency 'at this stage'

The World Health Organization said the escalating monkeypox outbreak in nearly 50 countries should be closely monitored but does not warrant being declared a global health emergency.

A barge that ran aground near Vancouver's English Bay last year quickly became an accidental attraction, drawing selfie-seekers and inspiring T-shirt designs. But after seven months, residents seem to have grown weary of its hulking presence on the shoreline.

Ukraine's largest LGBTQ rights event, KyivPride, is going ahead on Saturday. But not on its native streets and not as a celebration.