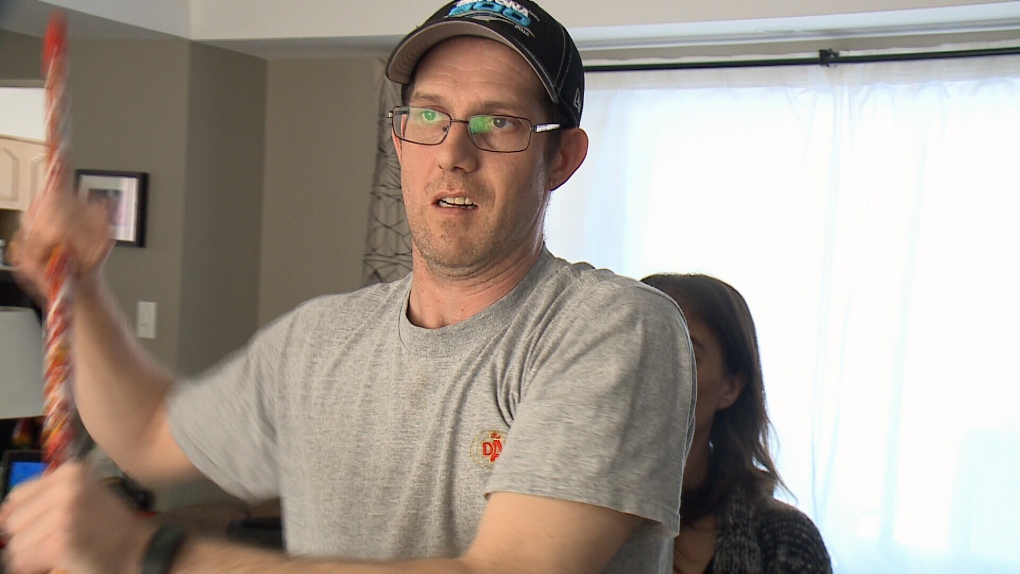 The owner of an Ottawa tow truck company is trying to reclaim his life and his livelihood.  Mark Pittuck was critically injured in an accident two years ago.  He says in the interim someone has taken his company's name and business.

Vic's Towing Service has been a fixture in Ottawa's tow truck industry for 40 years.  It is a registered, trademark name that now is on someone else’s trucks as the real owner struggles to come back from the brink of death.

At a residence in west end Ottawa, Mark Pittuck struggles to get out of a chair.  Every step he takes, though, brings him one step closer to regaining his life.

Moving is difficult; so is talking.

In October of 2014, Pittuck who own's Vic's Towing and Recovery Inc., was winching a car, when the cable snapped, blew him off his feet, shattered his jaw and cut his carotid artery.

“I was very close to dying,” Pittuck says, his speech difficult to understand.

“I woke up three weeks later in the hospital,” he says, “I couldn't walk, I couldn't talk ,nothing.”

His girlfriend, Tanya Bruce, was with him that day and wrapped her shirt around his neck, saving his life.

She is now helping nurse him back to health. He put his business on hold while he recovered, only to discover someone else is using his name, logo, even the same phone number.  The company established in 1975 that had built a stellar reputation now has complaints piling up on its Facebook account.

“Somebody is destroying his name,” says Tanya Bruce, “everything he worked so hard to build up is being slowly destroyed.”

“It’s unlawful to take someone else's property,” says Vanier, “whether that’s a brand name, trademark or even a car and degrade it. It is unlawful and they can be held in damages accordingly.”

Legal documents show an east end address as the business site of Vic's Towing and Storage. CTV Ottawa attended the address where an older man answered the door, refusing to give his name nor the phone number for the owner whose business was incorporated under Vic’s Towing and Storage through the Registrar of Government Services.  CTV was told to vacate the premises.

Lawyer Rod Vanier says no one is lawfully allowed to trample on someone else’s trademark, despite that incorporation.

“The government hasn't regulated it, hasn't given it's okay,” explains Vanier, “It's a passive posting technique to say we are using this name, this is where we can be found.  That’s what a master business license gives to anybody but there is no vetting of a name in that process.”

It was a tow-truck driver from Discount charged in that  fatal collision last November on Meadowlands in which a 55-year-old man was killed and his 13-year-old daughter injured.  According to documents, it was just days after that fatal crash that “Vic’ss Towing and Storage” was registered as a business under the Business Names Act.

“I think someone saw an opportunity,” says Rod Vanier.

Pittuck says his good business name is all he has left.

“I lost my house, I lost my trucks, everything.”

He wants his business name back.

The company has not responded yet to the legal document served them.  Pittuck's next step will be a court challenge but that takes time and money.