'I've had a few sleepless nights': Senators general manager discusses the team's start to the season 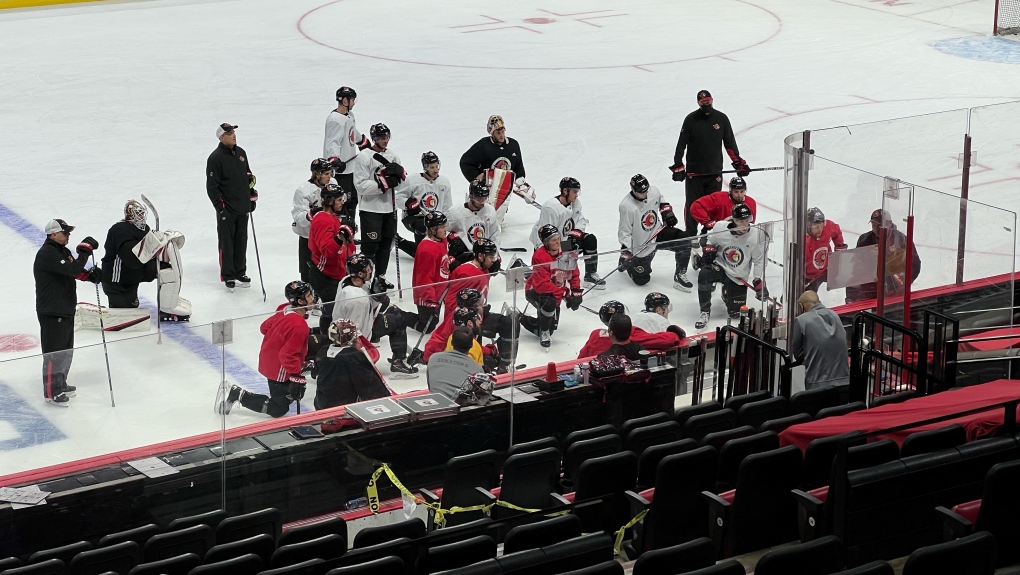 The Ottawa Senators returned to practice Nov. 20, 2021 after three games were postponed due to an outbreak of COVID-19. (Jeremie Charron/CTV News Ottawa)

Ottawa Senators general manager Pierre Dorion says players, coaches and management must all be better for the Senators to turn around their season.

After winning five of the first 21 games this season, Dorion admits sitting in last place in the NHL this season was not what he expected.

"I've had a few sleepless nights. I have not enjoyed this stretch of our team but it's not for a lack of effort," said Dorion during a media conference at Canadian Tire Centre Saturday morning.

"The players are playing hard, but sometimes players don't play up to their potential and they know it too. The buck stops with me, and I am not afraid to say that. We did not anticipate this and we're going to battle through it. Last year, we had a tough stretch, battled through it and finished strong."

The Senators won one of 12 games in November, and had three games postponed due to a COVID-19 outbreak within the club. The Senators beat Carolina 3-2 on Thursday night.

"There's still 60 games left, I know the work ethic is there, the will to win is there and we're going to continue on that path," said Dorion.

Before the season, Dorion declared the rebuild was over for the Ottawa Senators. On Saturday, the general manager said he made the statement while caught up in the excitement of the new season.

"Probably what I should have said is pretty much all the core pieces of the rebuild are in the organization right now," said Dorion.

"I didn't see foresee us winning just five games after 21 games, but probably how I should have phrased it, and that's on me and no one else, is that most of the core pieces I feel, and we might be one piece away, are in the organization at this time."

Injuries have hit the Senators this season, with centres Colin White and Shane Pinto suffering shoulder injuries, while defenceman Erik Brannstrom broke his arm. Ten players and a coach were placed in the NHL COVID protocol last month.

With three quarters of the season remaining, Dorion says everyone needs to "step up" to help the team improve.

"I’m not going to name players, but a lot of the players on this team have underperformed this year to the level they performed to especially in the second half of last year," said Dorion.

The Senators host the Colorado Avalanche Saturday night at Canadian Tire Centre, followed by games Monday night in New Jersey and at home Tuesday night against the New York Islanders.