Denis Begin, 39, has worked in the federal government for 15 years, “I’ve had a great career thus far.”  He took the job in hopes of having a stable and secure financial future.

Begin, his fiancé and two daughters live comfortably in an Ottawa suburb, they’ve spent years volunteering with the food bank and giving back to the community, but this holiday season it’s them who may need some help, “I’m always thinking about what’s going to happen here,” says Begin, “we registered our kids for toy mountain.”

Begin’s life took a drastic turn on July 28, he suffered a rare heart condition called Aortic dissection, “my aorta shredded, it blew up, which normally has a five-percent survival rate.”

After life-saving surgery at the Ottawa Heart Institute, Begin, started the long road to recovery.  It meant going on long-term disability through the federal government, “we were nervous because being in the government Phoenix is known as being problematic.”

There is a 13-week waiting period before disability insurance kicks in, employees must use up sick-leave or enroll in Employment Insurance (EI), to help bridge the gap.  When Begin started the process to sign-up for EI, it was up to his employer, through the Phoenix Pay System to send in his Record of Employment (ROE), “I contacted Phoenix they said ‘five business days I’ll send that right over, I’ll get your claim started’, but that never happened.”

It took nearly three-months for Begin to receive a payment from EI and when the money started rolling in it just wasn’t enough, “we owe so much to so many people, we’re in a rough place.”

Ironically Begin’s fiancé, also a public servant, has been in an acting position but hasn’t received her acting pay for nearly a year.  Begin says at least she is still getting her regular paycheque.

Begin knows this will be a difficult holiday season and new year for his family but he knows, with his heart issues, things could be worse, “it’s sad to see the situation we’re in but then again it could be just her (fiancé) and the two girls (daughters), and they would go visit me in the ground. I’m alive.” 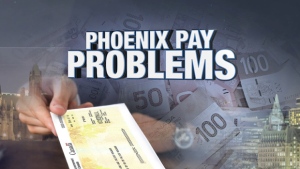