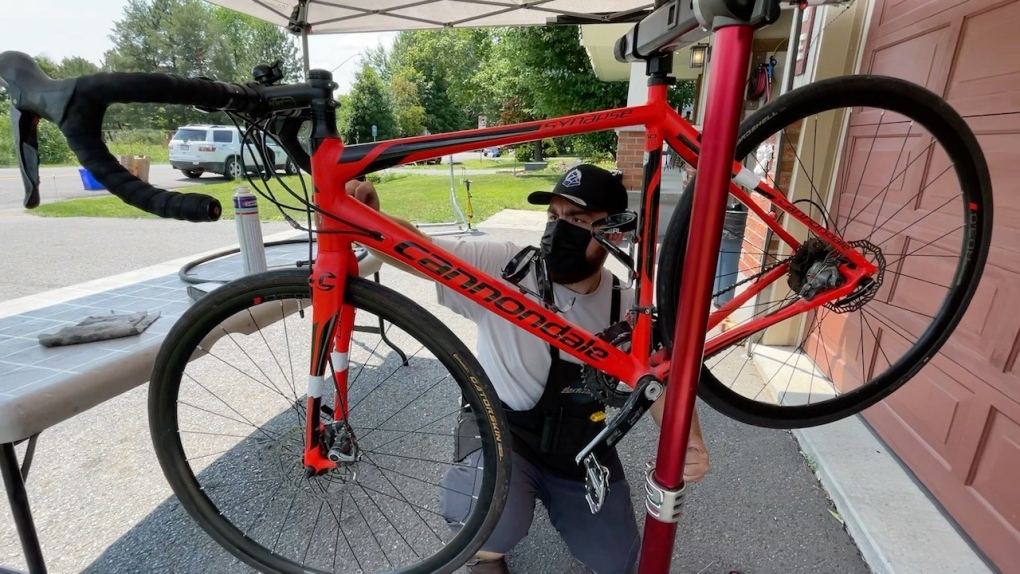 OTTAWA -- When one door closes, for some, a garage door opens, turning what had been part-time for the past five years into a full-time business.

Lucas Zurawlev fixes bikes out of his garage in Ottawa’s west-end. When he graduated from Algonquin College in an electrical-mechanical engineering technician program, specializing in robotics, he had to change gears.

“After I graduated, it was the year that COVID started. I had a job lined up in my field, and they basically said, ‘Due to COVID, we’ve temporarily suspended our hiring,’” he tells CTV News Ottawa. “I have no intentions of going back. It’s sort of in my back pocket as a backup.”

“I fix bikes in the summer, and I deal with skis, snowboards, cross-country skis in the winter,” he says.

The very thing that caused him to adapt, also meant he had more bikes to work on.

“Because of COVID, everyone has decided they wanted to start riding bikes a lot more.”

Combine that with being next to the Trans-Canada bike path and it’s a recipe for success.

“There’s lots of commuters coming by every day and if they have a problem mid-ride, it’s a lot easier to stop in for a small thing,” he says.

“He’s right off the bike path, it’s the perfect place to be,” says Kirk Reid, a passing cyclist.

Zurawlev says he’s also a part of the Ski-Patrol at Camp Fortune, which means he’s trained in first aid. That has come in handy working next to the major bike path. “

I have my first aid kit with me everywhere I go. A lot of the time, (I) not only check out their bike and make sure that’s safe and ready to go, but I also give them a bit of first aid too.”

Call it a neighbourhood bike repair pit stop. Everything from fixing a flat to a major overhaul, you can get it done at Z’s.

“A minor adjustment is $10. It can fix your brake, your gears, whether it’s the rear or the front,” he says, “For a complete bike overhaul, you’re looking at a few hours of work; which is close to about two or three hundred bucks.”

If you’ve been planning on heading out on your bike, but it’s still in storage, Zurawlev says there are a few things you can do by yourself to get up and running.

“Definitely, the first thing is to try and inflate the tires. A lot of people will assume if they see a flat, it needs to be changed. Tubes are porous, they do lose air, especially if you’ve left it sitting for over a year.”

He also recommends you keep your chain oiled with the right kind of lubricant.

Eventually, he hopes to open up a bricks-and-mortar bike shop but, regardless of where he works on bikes, he’ll continue his passion.

“I absolutely love what I’m doing, mainly because I get to help out my community as much as I can.”