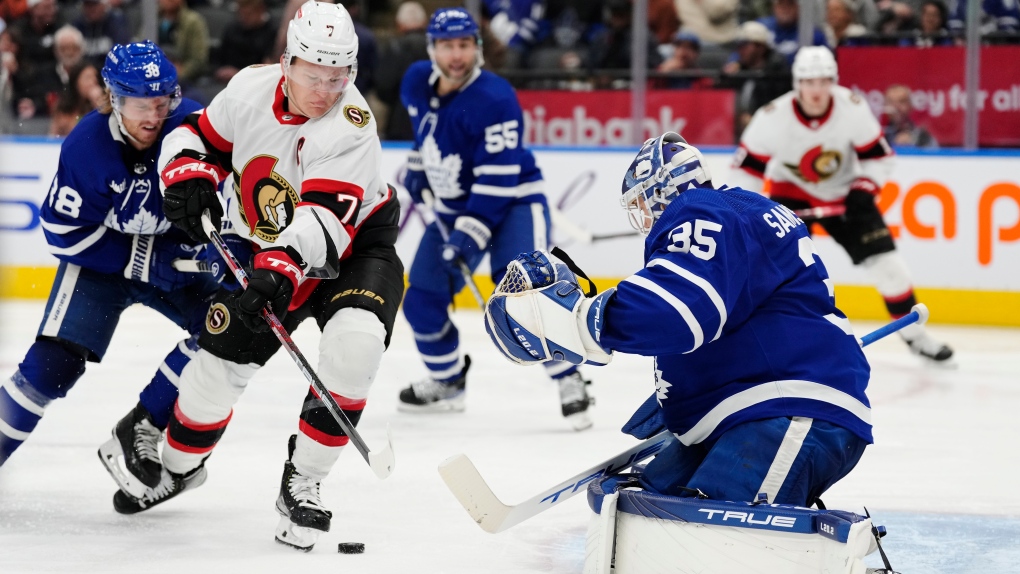 The Maple Leafs envisioned a two-headed goaltending tandem to start this season following a summer of change.

With his partner already sidelined, Ilya Samonsov has an early opportunity to stake his claim to Toronto's crease.

The netminder made 26 saves and Justin Holl scored the winner with 1:55 left in regulation Saturday as the Leafs defeated the Ottawa Senators 3-2.

Samsonov started in place of Matt Murray, who was poised to get the call against his former team before leaving the morning skate at Scotiabank Arena with an abductor injury.

"This is hockey," Samsonov said. "Sometimes you get put in a bad situation. I'm ready all the time."

The Leafs announced about an hour before puck drop against their provincial rivals that Murray, who had a hard time staying healthy in two seasons with Ottawa before a trade to Toronto, had been placed on long-term injured reserve and will miss at least four weeks.

"You never liked to see guys get hurt," Holl said. "It's very painful, both physically and mentally for guys."

Erik Kallgren, who was knocked out of the Toronto Marlies' AHL opener Friday, was recalled and healthy enough to dress as the backup.

Leafs general manager Kyle Dubas bet big on the Murray-Samsonov tandem -- goaltenders with past success, but lots to prove -- in the off-season after trading the oft-injured Petr Mrazek and letting all-star Jack Campbell walk in free agency.

William Nylander and David Kampf had the other goals for Toronto (2-1-0).

Claude Giroux, with a goal and an assist, and Shane Pinto replied for Ottawa (0-2-0), which got 29 saves from Anton Forsberg.

"For the most part, we played well," Senators captain Brady Tkachuk said. "But it definitely stings."

A defenceman known mostly for his play at the other end of the rink, Holl buried his first goal of the season after pinching down into the slot as Michael Bunting took the puck to the blue paint.

Nylander pushed the Leafs ahead 2-1 with 6:36 remaining in the third with his second after the Senators couldn't clear the defensive zone.

But the visitors responded 1:25 later when Giroux banged home a loose puck for his first with Ottawa.

With their rebuild over and a young core led by Tkachuk, Tim Stutzle and Thomas Chabot a year older, the Senators had a headline-grabbing summer with the additions of Giroux, sniper Alex DeBrincat and goaltender Cam Talbot, who's currently out with an upper-body injury.

Toronto, meanwhile, picked up its first victory of the season Thursday in a 3-2 triumph over Washington in Samsonov's debut for the Leafs against the team that cut him loose.

Coming off a 4-1 loss in Buffalo to open its schedule, Ottawa took the lead on a power play at 9:09 of the first when Pinto ripped a one-timer for his second NHL goal after missing most of last season with a shoulder injury. Rookie defenceman Jake Sanderson picked up the second assist for his first point as a professional.

The Leafs tied the game with 16.4 seconds left in the middle period when Kampf redirected Jake Muzzin's shot through Forsberg's pads.

Samsonov had to be sharp in the third when Tyler Motte swept the puck off the stick of T.J. Brodie and on goal as the Toronto defenceman skated in front of his own net before the teams scored three times in under five minutes.

"It was pretty funny," Samsonov said with a grin. "This is a hard moment. You need to (be) ready for this."

The Leafs will need him to be ready plenty more in the coming weeks.

Murray played just 47 games in his two seasons with the Senators following a trade with Pittsburgh.

Senators head coach D.J. Smith was asked Friday about Murray when it looked like his former netminder would get the start against Ottawa.

"Take nothing away from him," Smith said. "He was hurt all the time. He had a lot of bad luck."

Senators: Host the Boston Bruins on Tuesday in their home opener.

This report by The Canadian Press was first published Oct. 15, 2022.