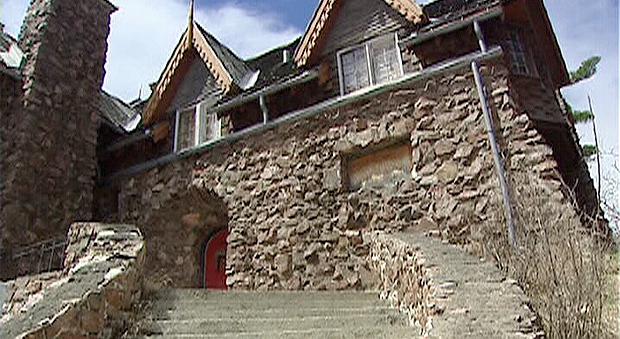 A view of the front entrance to the O'Brien House on Meech Lake in Gatineau Park, May 5, 2014

And if you’ve never heard of it, you’re not alone. “Until I came here for the first time I did not know it was here. So I think it’s a hidden treasure,” says realtor Ed Belanger of Colliers International, the firm in charge of finding the historic property a new lease on life.

But if you’re a serious hockey fan you should know about the man who built it.

J. Ambrose O’Brien played a pivotal role in the history of the National Hockey League. He started the National Hockey Association – predecessor of the NHL. He is also the founding owner of the Montreal Canadiens. “I know when he named them he wanted them spelled the way they’re spelled, Canadiens not Canadians,” says Kerry O’Brien.

The industrialist and entrepreneur from Renfrew, Ontario, built his palatial summer house on Meech Lake in the early 1930’s. It became a family retreat for the next three decades. “The best memories of my life are in that period,” says his granddaughter.

The National Capital Commission took ownership in in 1964. It served as a government conference centre alongside its better-known neighbour, the Wilson House – home of the Meech Lake Accord.

But time has not been kind to the O'Brien House. Today the stone and timber structure is in a state of disrepair. Doors are boarded up. Windows are broken. The interior has been stripped down to the frame, leaving O’Brien’s descendants heart-broken. Kerry O’Brien won’t even visit it anymore. “I want to remember it as it was,” she says.

In an attempt to salvage the historic home the NCC is offering it for lease as a business. Ed Belanger envisions it as a bed and breakfast, a small inn, or conference centre. But it could be a tough sell. Belanger says general repairs to the building have been estimated close to $2-million. “It needs a little bit of TLC,” he tactfully explains.

Without it this storied house, with ties to our national winter game, could fade from history altogether.